The Ups and Downs of Gas Prices

Last year, during May, the average per gallon price of gasoline was close to $1.87. Now, the national average is $3.38: 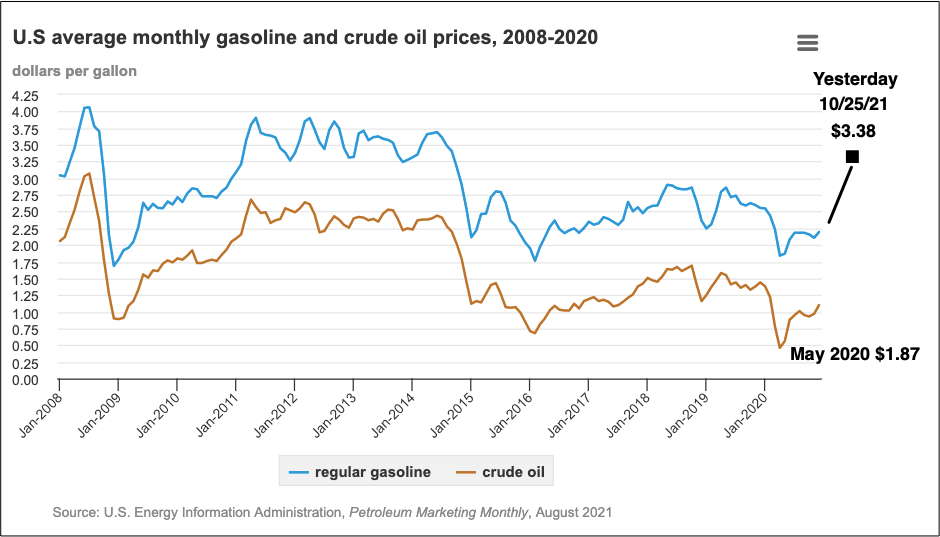 The price of gasoline depends on four variables: 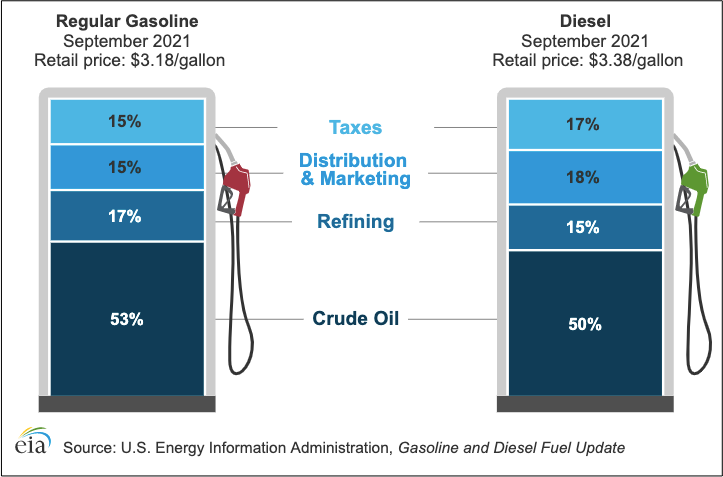 From there we wind up with a national average. But, as you know, averages can be misleading. In California, you might pay a whopping $22.80 more than in Texas to fill your 15-gallon tank. The reasons range from gasoline taxes to the state’s environmental mandates. We could also add that California has less access to a pipeline infrastructure and refineries than states like Texas.

The result is a vast split between the high and low gas states in the U.S. with California having a nationwide per gallon high of $4.55 and Texas, at the low end, at $3.03:

State taxes are one reason for the difference in gasoline prices. While we see them per gallon at the pump, they also could be levied on wholesalers and then passed along to us. They range from a per gallon high of 66.98¢ in California to a low of 14.98¢ in Alaska:

When an economist looks at gasoline prices, she will probably ask about our elasticity. She will wonder how much the quantity we are willing and able to buy “stretches” or “shrinks” when price changes. If price changes a lot and the quantity we buy remains almost the same, as with medication, then our demand is inelastic. By contrast, if price swings have a big impact on buying, then our response is elastic.

With gasoline, the quantity we demand tends to be inelastic. Consequently, when price drops, we don’t buy a lot more. The impact of that inelasticity was $1,000 more in our wallets because of a 2014-2015 price plunge. When researchers looked closely at the impact of that plunge on 500,000 consumers, they said it was the equivalent of adding $1,000 to their disposable income–rather like a raise. With their “raise,” consumers spent more on non-gasoline and gasoline purchases. As economists that means their MPC (marginal propensity to consume) was approximately 1. The number 1 is for 100%. It says that all of the disposable income total goes to spending and zero on saving. Especially when price (surprisingly) drops from 2014 to 2015, the quantity consumers demand soars.

Circling back to 2021, we have a reversal. Now, with prices rising, we can ask if that elasticity stretches in the other direction. We can ask if the economic recovery from Covid will be constrained by the hike in gas prices.

My sources and more: I’ve been concerned that there are few headlines on surging gasoline prices. That took me to my go-to gas website, the U.S. Energy Information Administration (EIA).  I also returned to the Tax Foundation and the AAA for up-to-date gas taxes. Then, for an academic lens on elasticity and MPC, this paper took us to the consumer.

Why We Are in the Middle of the Great Resignation