How to Solve the Missing Chips Problem

A concerned consumer (artist Henry Hargreaves) complained about misleadingly “puffy” chips bags. Injecting some science, he dunked the bags in water and calculated the displacement. Then he repeated the experiment with the contents in a smaller vacuum sealed bag.

This is some of what he discovered: 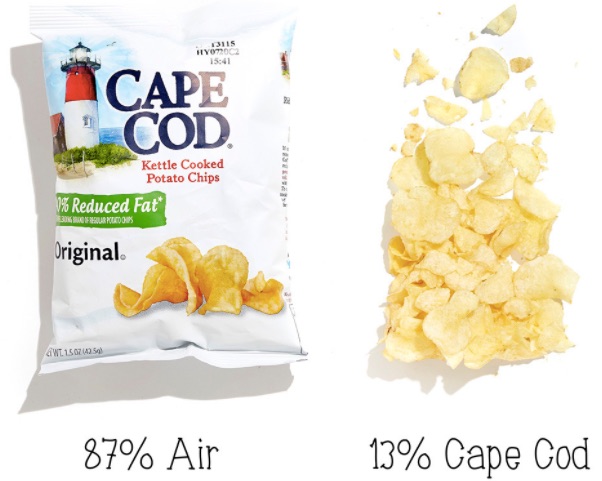 You would think that Pringles, with its stacked tin, had less “air.” But it does not: 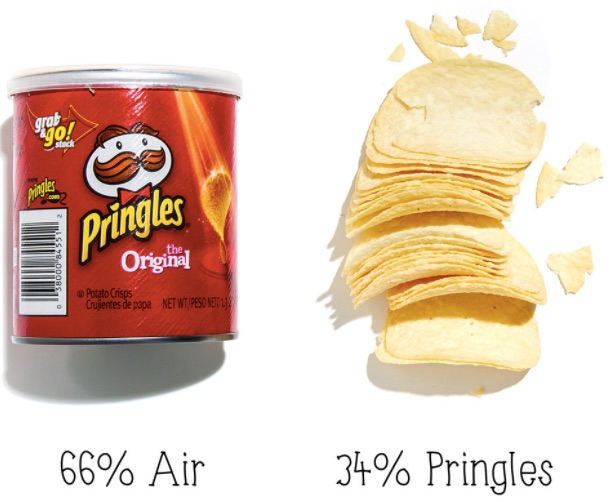 And Doritos are much worse. 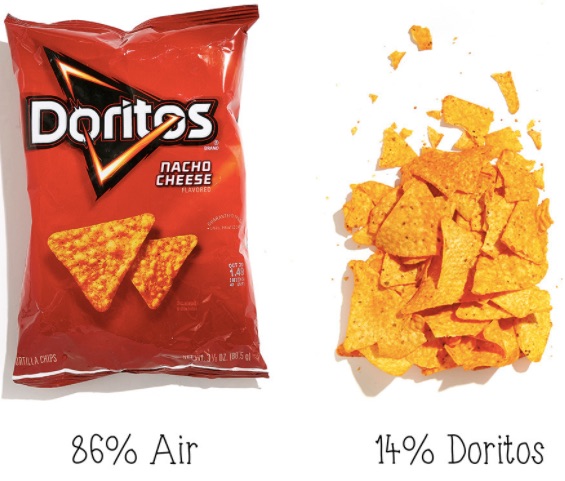 We should note that what Hargreaves calls air is really nitrogen. Our snacks are packed in nitrogen because it provides a longer shelf life and perhaps better taste. The oxygen in the air would make them soggy.

But where are we? Heading toward government regulation…

From Fish to Chips

I have good and bad news for Starkist tuna eaters.

Sued in a class action case for under-filled cans, Starkist agreed to a settlement. They would pay litigants a cash payment of $8 million and vouchers worth $4 million. The bad news is that there were 2.5 million participants in the class action suit. The divided loot came to $2.19 per person in cash or a $4.43 tuna voucher.

Last April, a case was filed in Manhattan Federal Court against the maker of Wise potato chips. Because their bags are 58% to 75% empty, the suit alleges that the product should have been cheaper. Technically, we are talking about “non-functional slack-fill.” No decision has been announced by the court.

Non-functional slack-fill lawsuits are multiplying. Hot tamales, Mike and Ikes, Jujyfruits and Whoppers are only some of the candies consumers have said are deceiving them. Including other reasons for class action suits against food firms, the number of cases was 170 in 2016.

That takes us to a question.

We can have a market where demand takes care of the slack-fill problem. After all, a dissatisfied consumer can regulate by buying less. But we can also have a government that precisely lets businesses know what they are not allowed to do.

When we have missing chips, which solution has more of a downside…the market government?

My sources and more:  The more I read about the slack fill cases, the more I wondered about the solution. A good start is with the BBC’s article on Henry Hargreaves and his website. Then to read onward, the tuna case is at Consumerist and Wise, at Reuters. For still more, the Whoppers case, yes, is a big one as is Subway’s victory with 12-inch rolls that were too short. Finally, here, the candy industry defends itself.

The Rise and Fall of Organic Milk