We changed our minds about smoking.

The main reason was the money.

In a May 2020 paper, economists from the University of Denver concluded that cigarette taxes play an important role in reducing smoking. Covering 1970 to 2017, they used data from 482 changes in state cigarette taxes to see their long term impact. As a first step, they looked at how those taxes influenced teenage smokers. Then, finding reduced purchases, especially for 12- and 14-year olds, they estimated how much less, as adults in their 20s to mid-60s, those teenagers would smoke.

For first time mothers, a $1 cigarette tax increase at age 13 led to a 23 percent lower chance that these moms would smoke during the year a first child was born. Similarly, that $1 tax hike diminished by 46 percent the likelihood that a 14-year old would be an adult smoker. Because smoking typically starts at a younger age, the taxes had less of an impact on 18- and 19-year olds.

Overall, the paper considered if people smoked, how often, and whether they stopped. It told us that the national cigarette tax average was $1.07 a pack in 1970. Then, before rising again, it dipped to a low of 51 cents a pack in 1982. 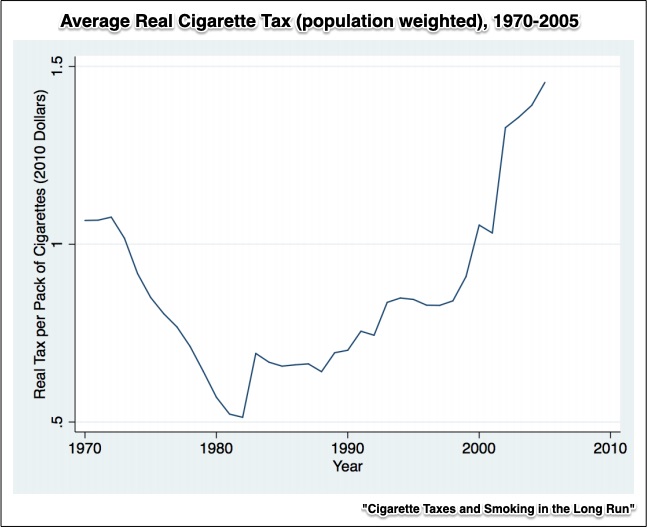 Out Bottom Line: Law of Demand

Higher cigarette taxes take us to basic economics. When price goes up, the quantity demanded goes down.

From here, Nobel economics Laureate Richard Thaler took the leap to increasing Covid vaccinations. During a Bloomberg radio interview, he suggested that cigarette taxes provided the prototype. His example was the unvaccinated NFL players that would owe a $14,650 fine every time they violated Covid procedures. His point? By increasing the cost of a behavior, people will do less of it. Dr. Thaler also commented that a positive incentive like $100 payments would be less effective because we had no market to determine the appropriate price.

Where are we? Returning to our title, we can say that whether it’s cigarettes or vaccinations, a cost hike can make us healthier.

My sources and more: Thanks to Bloomberg radio for a Richard Thaler interview that displayed the behavioral economist’s perspective on influencing opinions. Dr. Thaler led me to the relevance of cigarette taxes, this NBER paper, and this ESPN article. He also reminded me of a Hidden Brain podcast on misinformation. Then finally, taking us to Arthur Pigou, this econlife looked at another tax that made us healthier.

How An Olympic Medal Can Make Someone Sad