How An Olympic Medal Can Make Someone Sad

Like the silver medalist (below) that lost the gold to Michael Phelps (center):

Still true today, studies that were published during 1995 and 2006 reported that silver medal winners tended to be less happy than the athletes who won bronze. Revealing how they really felt, during the medal ceremonies, many of the silver winners’ smiles were not quite real. Yes, their lips were upturned. However, they didn’t display the whole cheek rise and eye crinkling of the genuinely happy gold and bronze medal winners.

In one paper, psychologists used shots of 20 silver and 15 bronze 1992 medal winners. Study participants then rated the expressions on a 1 to 10, agony to ecstasy scale in which 1 is agony and 10 is ecstasy. The mean for the silver medalists was 4.8 whereas bronze was  7.1. Measured another time, the silver average was 4.3 and bronze, 5.7.

You can see that bronze winners, in the bars on the right, have higher happy scores: 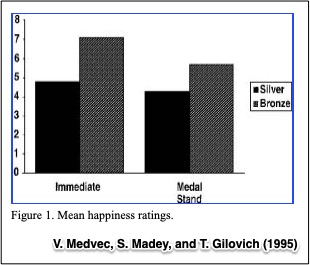 The paper that confirmed the older studies was published during November, 2020. Winding up with similar results, scholars from the University of Iowa and University of Minnesota looked at photos showing Olympic medal ceremonies for 413 track and field athletes between 2000 and 2016.

As a behavioral economist, we could say that silver and bronze medalists feel differently because of their reference points. Reference points come in handy as a tool for assessing an accomplishment. At work we will be unhappy with a 5% raise when an associate gets 7%. If our stock portfolio plunges, we don’t feel so bad if the S&P declined even more.

Similarly, silver medalists focus on the counterfactual that could have been. They think, “if only…” and “why didn’t I just…” By contrast, bronze winners tend to take pride in having won a medal and topping so many other competitors. The silver medalist focuses “upward” on the gold winner as his or her reference point. Meanwhile the bronze thinks “downward” about the fourth place (and lower) she thankfully avoided.

Perhaps a 91-year old silver medalist sums it all up. Looking back at the 1912 Olympics, Abel Kiviat said, “I wake up sometimes and say, ‘What the heck happened to me?’ It’s like a nightmare.” He lost the 1,500 meter race by one-tenth of a second.

My sources and more: You might enjoy (as did I) starting with a Hidden Brain podcast. From there, the articles about medal winners emotions came from The Washington Post, NPR, and the University of Iowa. Then, if you want the academic perspective, do take a look here, here, and here. Please also note that our featured Imaged is an AP photo from the University of Iowa and parts of today’s “Bottom Line” were in a past econlife post.

Which Firm Was the First Robinhood?