I am close to convincing a very good friend of mine that women can be as good as or better than a male professional baseball coach. He used to say that it was crucial for women to have the experience playing the game that only men have. I said that there is a basket of skills that a good coach needs. Because game experience is just one, it might be superseded by a woman who understands body movement. My point is that men perpetuate hiring men and paying them more because they value only the talents that a man might have. When the San Francisco Giants hired coach Alyssa Nakken, they took the first step.

Today, let’s move beyond baseball and see the changes that men and women need to accept for workplace equality.

The average full time female worker earns 18 cents less than her male counterpart while the gender wage gap for female college graduates is 28 cents. Correspondingly, the University of Michigan reports that 35% of the men and 18% of the women became partners at large law firms 15 years after graduating, The story is similar at large accounting firms where half of all new accountants are women. But women occupy just 16 percent of the top positions.

Next, we can use an IWPR (Institute for Women’s Policy Research) Policy Brief to move beyond the averages. Looking at 120 occupation, they report just five where women earn more than men. Women who become producers and directors can enjoy the 106.7% gender ratio. Then, at the other extreme, female Medical Scientists endure a 65.2% gender pay gap.

I’ve copied snippets of the charts from the IWPR Report to give you a more precise image of the gap: 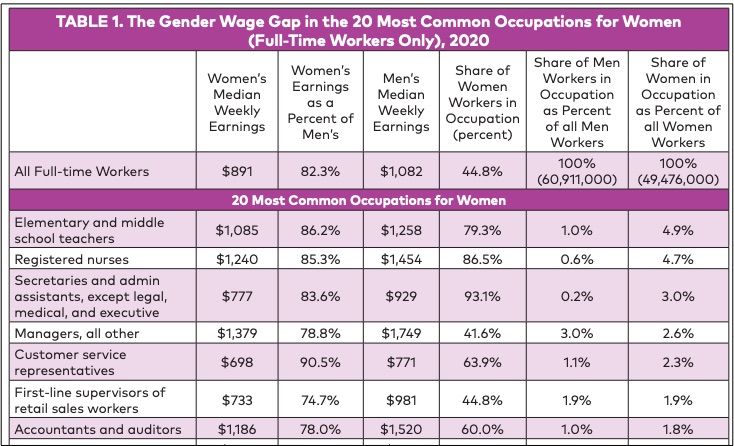 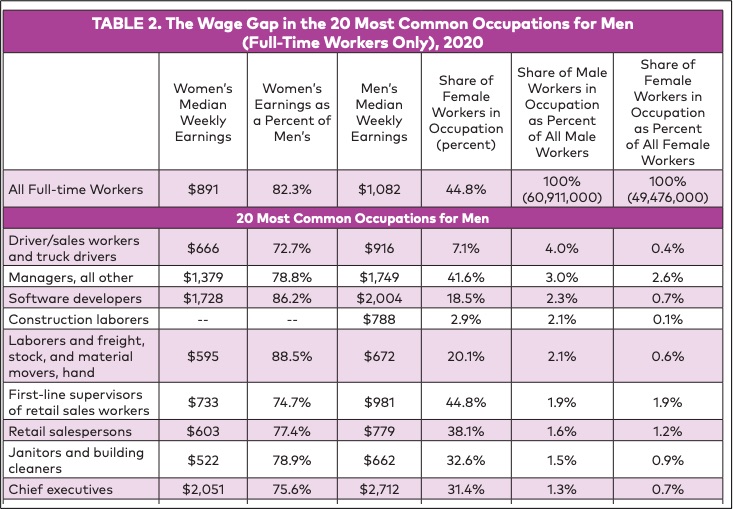 Below, ethnicity further displays what an average misses:

According to Harvard economist Claudia Goldin, a large cause of the gender wage gap is a woman’s family-related obligations. Whether it’s children, the elderly, or another family member, in American culture, the woman has traditionally been the caregiver. Because women have had to be available for caregiving, their pay and promotions have suffered.

One exception is the pharmaceutical profession. During the 1970s when drug stores were small and owner-operated, men earned more than women. Now though as the industry has consolidated and the job has become standardized, the difference between what a male and a female earn per hour is almost or entirely equal. The proliferation of technology that facilitated standardization and eliminated the need for a personal relationship with customers meant one pharmacist could easily replace another. Consequently, one-third of the female pharmacists in their 30s work fewer than 35 hours a week. Being a part-time pharmacist generates no wage penalty.

We are left asking if other professions can accept a similar kind of substitutability.

A behavioral economist might say that we are dealing with a confirmation bias. Defined as a result that is determined by what we expect, a confirmation bias perpetuates the status quo. The pharmaceutical profession has changed the status quo. By accepting substitutability, it has a new set of expectations. It has become family friendly and one of the most equitable professions in the U.S. The same changes have begun to unfold in pediatric and veterinary practices.

Returning to where we began, so too might baseball?

My sources and more: The Nicholas Kristof NY Times column reminded me it was time to return to the gender.wage gap. From there, my go-to web site is the Institute for Women’s Policy Research. Happily they had the perfect update. Please note that several sentences about pharmacists were in a past econlife post.

A Brief and Basic Primer On the Federal Debt

The Economic Lenses That Divide Us