The Economic Lenses That Divide Us

Today, I wanted to share some thoughts about a recent Atlantic article from journalist George Packer.

Our starting point is traditional politics. For the 20th century Democrat, the focus was the social state. Emphasizing a “fair shake” from society, Democrats have been concerned with how much healthcare, education, retirement, and income support government should provide. Meanwhile, on the Republican side of the aisle, we have the politicians who support market-based behavior. Essentially the philosophy is compete, work hard, earn as much as you can, go to the best schools. To pay for it all, save and or borrow.

Our simple two-sided divide did not last.

Now we have four ways to see the world. And each one includes the word America.

We could call the libertarian strain in American politics our Free America. Friedrich Hayek would have been their go-to economist. Hayek was the person who said, “The curious task of economics is to demonstrate to men how little they really know about what they imagine they can design.”

Also emphasizing freedom, a second group uses the word “real.” But here we inject nationalism and the quest to retain what they believe we once were. It’s a group that opposes a government that would try to limit its rights.

Then, moving leftward, we have a third group composed of the educated elite. The executives and scientists and professionals that populate this group include computer engineers, financial analysts, consulting and design experts. The meritocracy is their mantra.

And finally, still on the left, we have the “just” group. This lens sees the inequality that was fueled by a meritocracy. It presses for us to address the disparate outcomes that characterize our society.

I know that I have oversimplified an article that itself had to oversimplify. And now, continuing to oversimplify but with some truth, we can have our four Americas respond to these graphs on the social state: 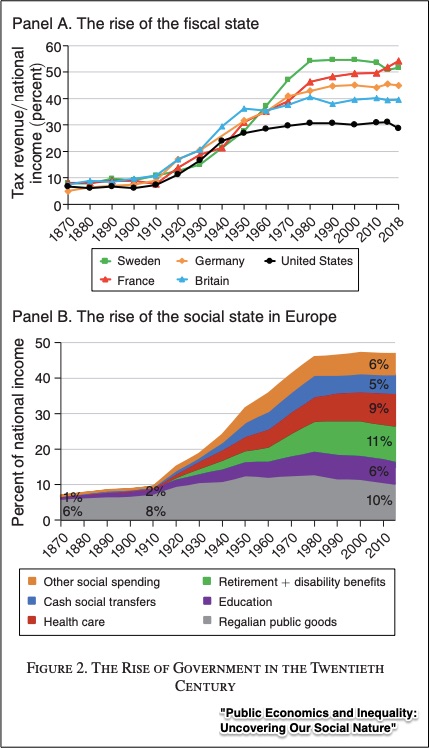 As you would expect, “Free America” is horrified that social spending has multiplied. At the same time, “Real America” might say the spending should be be used to expand home-based production. From there, Smart America believes it could solve all problems if we just correctly used enough money. Responding “Just America” cites institutionalized injustices that money cannot eliminate.

So where are we? Because what we believe determines our economic problems and solutions, policy makers receive disparate messages that complicate our need for a wise democratic government.

My sources and more: Most of today’s springboard was the Atlantic’s George Packer article. Then, from there, this Emmanuel Saez paper let me take the next step.