How to Select the Best Countries

Knowing that an auto was made in Germany, precision and quality might come to mind whereas for fashion, a “Made in Italy” label might make a difference. Though no one necessarily tells us, we assume what a country is good at.

Now, we no longer have to make those assumptions. Through a U.S. News list of the “best” countries, we can find out who really is best–or at least who everyone thinks is best. In its 2021 report–the sixth in the series–U.S. News tells us how more than 17,000 people scored 78 countries. The evaluations are pure opinion. Survey participants were given 76 attributes that they had to apply to selected countries.

When a country was consistently cited for the same attribute, after some weighting and a bit of math, for that characteristic, it received a high ranking score. Then, those attributes were grouped into 10 categories. Although U.S. News has a paragraph, I’ve selected just two or three words that describe the category:

Survey creators believed that the votes a nation attracted and its rank provided clues about why tourists traveled to a place and why businesses invested there. For example “Heritage” could have drawn travelers interested in history.

Among the 78 countries, Canada was first and Iraq was last: 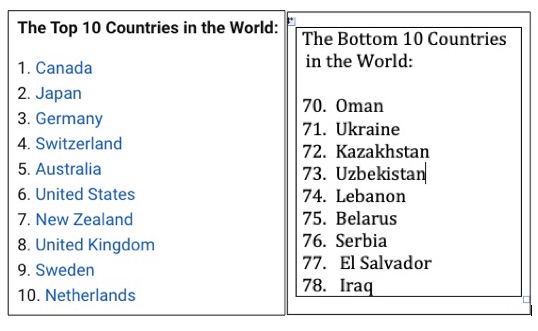 As the best country, Canada clinched the top spot with Quality of Life and Social Purpose: 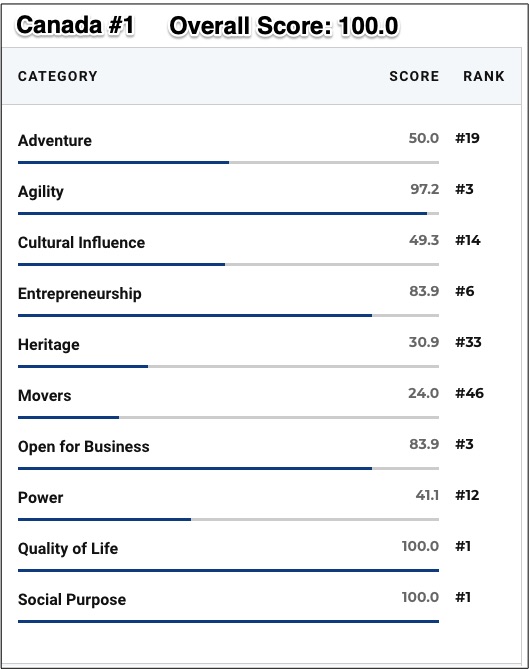 Meanwhile, the U.S. is #6 with 100s for Power and Agility offsetting a lower ranking for social purpose, quality of life, and open for business: 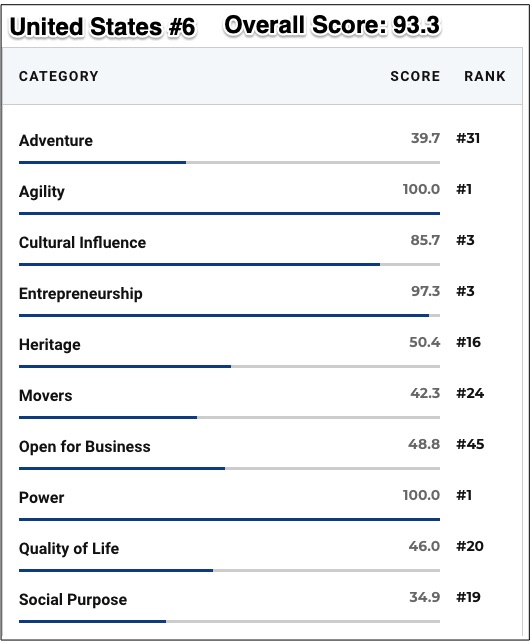 Long ago in The New Yorker, Malcolm Gladwell decimated college ranking systems. Pointing out that a rating number obscures the inaccuracies on which it is based, he trashed the U.S. News and World Report college issue. The alternative could be identifying people’s “revealed preferences.” For college ranking, revealed preference tallies where applicants were accepted and where they went. By compiling the data for thousands of students, statisticians can create a ranking that reflects what students believed were the best colleges.

Similarly, the best countries tally avoids collecting a huge volume of substantiating data. It does not need a statistic that proves a country is agile or adventuresome or good for business. Instead, it depends on perceptions. Your ranking  is based on opinions. Or, as James Surowiecki might have said in his book, it is based on the crowd’s opinions.  Like the market provides the Wisdom of Crowds by aggregating the decisions of many individuals, so too does revealed preference convey insight about countries.

Indeed for Canada and the United States, their ranking criteria provide insight.

My sources and more: Thanks to the Knowledge at Wharton email for alerting me to the U.S. News Best Countries ranking. From there, I listened to the podcast interview of the Penn marketing professor that oversees each annual study. Naturally, my next stop was the U.S. News “Best Countries” report. I also returned to a  WSJ  article on how a nation rebrands itself and to this paper on revealed preference. Lastly, I recommend the Gladwell article and James Surowiecki’s The Wisdom of  Crowds. (Please note that all tables and graphics are from Knowledge at Wharton.)

The (Surprisingly) Best Way to Reduce Our Carbon Footprint