Comparing a Meltdown, a Lockdown, and a Catalytic Converter

As the value of palladium goes up, so too do the number of catalytic converter thefts.

Unless you drive an EV, your car has a catalytic converter. Mandated because they diminish emissions, catalytic converters can be sliced off the belly of a car. From there, a scrapyard might offer several hundred dollars for the part, disassemble it, and sell its precious components. The spot price of the palladium in a converter has touched $2,775 an ounce while its rhodium, was near $21,900.

Like a catalytic converter, the coins in our money supply can be more valuable when we destroy them. The copper in a melted penny could be worth more than two cents. For a nickel, also, the copper could be sold for more than five cents.

A penny used to be 95 percent copper but now is mostly zinc. Nickels remain 75 percent copper. Knowing that many of us would sell the metal rather than spend the coin, meltdown became illegal in 2006. Or, as the U.S. mint told us, “We are taking this action because the nation needs its coinage for commerce. We don’t want to see our pennies and nickels melted down so a few individuals can take advantage of the U.S. taxpayer…”

Similarly, in Canada, in India, in the U.K., it is illegal to melt a coin and then sell its metal content.

However, since 1992 and the repeal of a non-melting law, you could melt coins in France. But, it appears that the Nordic gold (no gold, mostly copper) composition of Euro coins make them rather difficult to destroy.

Our coin supply chain takes us from the mint to banks and then retailers and consumers: 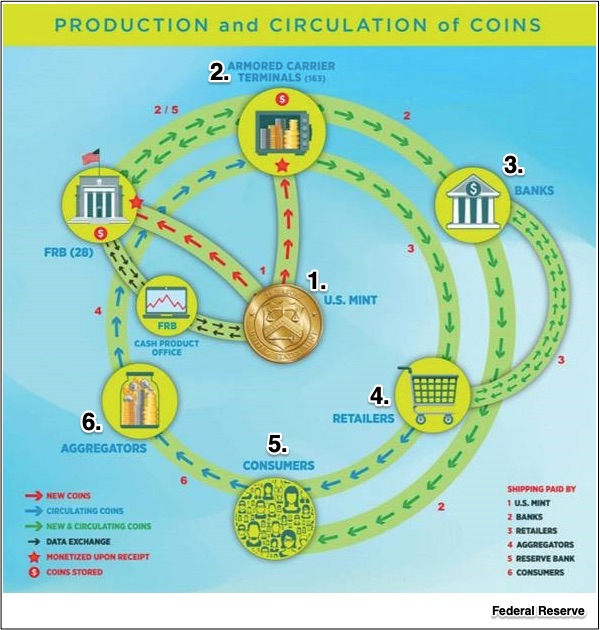 Now though, the chain has been broken because those coins are not flowing to consumers who ultimately send them back through the chain so they can be re-spent. Consequently, after the first lockdown, there was a coin shortage that a Federal Reserve task force has studied. Concerned that businesses need coins to complete some transaction they “urge” consumers to spend their spare change. They also asked banks to become more accessible.

So, whether looking at a meltdown or a lockdown, we want our coins to circulate…

And our cars to keep their converters.

My sources and more: The NY Times recently had the catalytic converter thefts story. From there, there are countless ways to check on the meltdown value of a coin. And finally, as dry as you might expect, here is the fed task force coin shortage report.

What a Difference a Fan Makes...Maybe