Tariffs and trade deals can have unintended consequences.

The Trump tariff war was not supposed to send jobs to China. However, Tesla responded in 2018 to China’s 25% retaliatory tariff on U.S. autos with a quickly completed plant in Shanghai. Otherwise, its prices would have been too high, especially because China lowered tariffs on cars from the rest of the world.

Likewise, the U.S. China Phase I trade deal has not worked out. Called a “flop” by the Peterson Institute, the deal foreshadowed the unexpected.

Based on the trade agreement that kicked in during February 2020, China agreed to 2020 targets for three baskets of goods. In the 96-page Phase I agreement, they included: 1) agriculture, 2) manufactured goods, and 3) energy.

Overall, China met 82% of its commitment:

Hit hard by China’s 25% retaliatory tariff, U.S. soybean exports were not back to normal at the end of 2020: 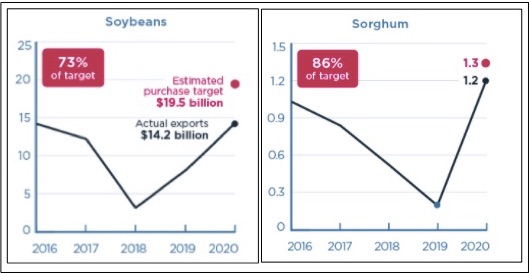 Meanwhile, we helped the Chinese deal with their pork shortage when we exported more than the Phase I commitment. They also started complying with a WTO ruling that necessitated upping their corn purchases from everywhere: 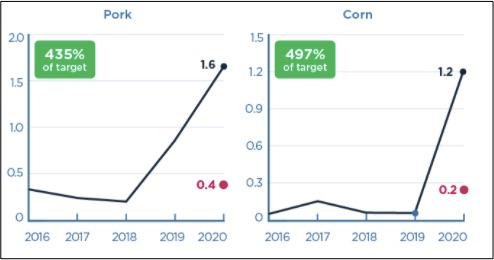 With manufacturing, China fared more poorly, meeting 57% of their commitment:

Rather like agriculture, the picture is mixed. China appears to have bought more of what they really needed and less of other items. For that reason, Tesla wound up in Shanghai: 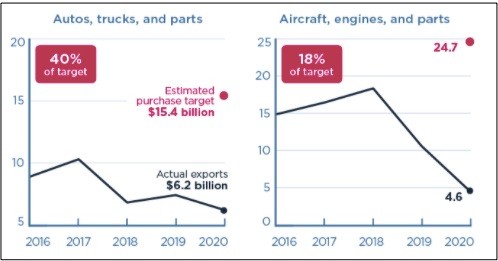 They exceeded the deal’s target for semiconductors and medical products: 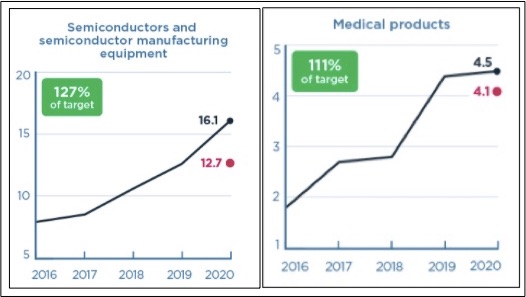 The Peterson report says that the energy expectations for crude oil, liquified natural gas, coal, and refined products were most likely unrealistic. The miss was massive:

It has been awhile since we’ve said David Ricardo (1772-1823) could be smiling from his grave. 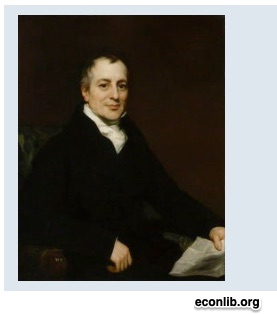 As the economic thinker who first expressed the idea of comparative advantage, David Ricardo believed freer trade benefits everyone. If each country produces whatever requires the least sacrifice, then the world becomes more productive. My example in class is the fictitious chef (Pepper Roni) who does everything well. But should she mow her lawn? No, because she would sacrifice writing new recipes that would benefit the world. Similarly, the U.S. should not produce everything because the sacrifice (the cost) would be too great.

Hearing that the U.S. has supported a new World Trade Organization Director-General and will attend next week’s G7 meeting, we are clearly once again heading in a multilateral trade deals direction…

My sources and more: As always, my go-to site for trade (and the graphs in this post) was the Peterson Institute. Then, CNBC articles, here and here, had the Tesla facts.

Comparing a Meltdown, a Lockdown, and a Catalytic Converter

The Thousands of Marvel Superheroes We Will Meet