The Chicken Sandwich War That Popeyes and Chick-fil-A Started

A Maryland man tried to sell his Popeyes chicken sandwich for $100 through Facebook. He even offered to deliver it in the DC area for an extra $38.52. 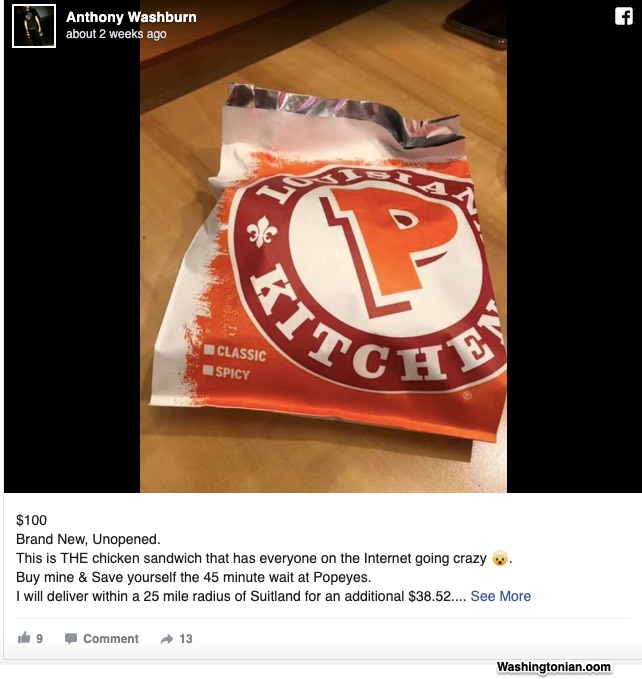 Because of the frenzy over the sandwich, he might have made the sale–especially when the price was $2500 on eBay after Popeyes ran out.

Where are we going? To competition.

We could be at peak chicken.

After Popeyes came out with its new fried chicken sandwich, the lines at some of its restaurants stretched around the block. Reputedly extra crispy with an unusually thick pickle slice, the sandwich was so popular that Popeyes employees had to work overtime. One fan ate six in three days.

A Popeyes rival, Chick-fil-A, was said to have started the chicken sandwich war with a tweet. It too has a fried chicken breast sandwich but theirs was first created in 1967. When Chick-fil-A slammed Popeyes, they  quickly responded.

With 2.3 billion chicken sandwiches sold during the first seven months of this year, all are experiencing unusually heavy demand, Popeyes ran out last week after expecting supply to last through September.

Popeyes says that its pickles are barrel-cured and its buns are buttery like its biscuits. The chicken meanwhile has special batter that makes it extra crispy. Telling us what is special about its sandwich is precisely what Popeyes needs to do. Each chain has to differentiate its chicken from everyone else’s.

In a monopolistically competitive market, it all makes sense.

Monopolistic competition is composed of two halves. The monopoly part indicates the company is producing something unique that you associate solely with it. But the competition half says that lots of others have something that could be identical or very similar. A beauty salon is the perfect example. You can get a haircut at many hundreds of shops. But the one person who does your hair is what makes the place unique.

Because we can say the same thing for a fried chicken sandwich, you can see why there is a war among the big chains. Each is trying to distinguish its version from all the others.

Rather than creating casualties, it appears that the chicken war only has winners.

My sources and more: The NY Times and WSJ both documented the chicken competition. My fact about eBay came from wvlt.

Our featured image is from Popeyes.

How to Calculate the Cost of a Disaster