Yesterday, at a Starbucks, I wondered if I had lifted tipping totals when I gave the barista a $5 bill. Actually, when I said I wanted to give her $1, she placed the five in the tip jar, pulled four singles out, and gave me my change. But still, I wondered if other coffee drinkers might have seen the five and been inspired to leave more.

According to a totally unscientific study described in WSJ, “seeding” the tip jar could be more effective. It needs to look filled with dollar bills for people to want to add more. That jar also should be placed to the right of the register because customers are right-handed. And, it helps for the jar to be big.

It turns out there is much more to tipping than we (typically) think.

On the receiving end, tipping generates inequality. As you might expect, at restaurants, waiters and bartenders benefit the most: 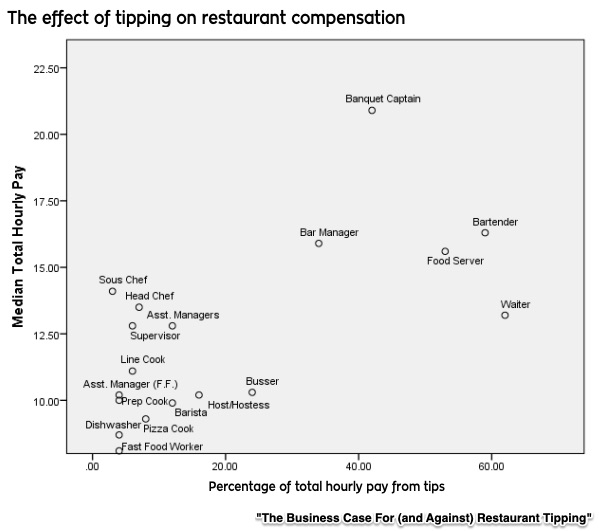 Meanwhile, on the giving end, it’s possible that a higher minimum wage will mean a lower tip. In NYC the minimum wage for most workers has risen to $15. One journalist reported that her informal survey indicated most of us won’t tip less. She found instead that our tipping relates to those incentives we might not notice…like the larger tipping jar.

We also can ask how tipping makes us feel. In a Joe’s Crab Shack study, researchers noted how diners responded when Joe’s eliminated tips and then re-instated them. Comparing restaurant satisfaction for “service-inclusive pricing” to tipping, diners upped the rating when they tipped. It appears that tipping made people feel better about the meal. So Joe’s switched most of their establishments back to tipping.

But that takes us to yet another issue, the “pressured” tip. Have you ever had an inappropriate iPad tip option? Purchasing some raw fish at a seafood store, their iPad credit card setup asked me for tips that ranged from 15% to 30%. It was way high for a store purchase. However, WSJ tells us that people are embarrassed when they ignore the prompts. One survey even indicated a no tip option generates more tips.

These are the tipping policies we like and dislike:

Tip-free dining had been called the “future of dining.” When restauranteur Danny Meyer tried it in NYC, he said it would benefit his kitchen and the front end. The chefs could earn more and the wait staff would have fewer problems with discrimination, sexist behavior, and “finicky customers.” He called it the moral high ground. Subsequently though, the exodus from his front end was considerable–maybe as much as 40% of his “legacy” staff between 2015 and 2018. While Meyer says he will stick with his “Hospitality Included” no tipping policy at some restaurants, the vast majority of the industry says staff and customers prefer tips.

It appears we have a paradox.

Although economists agree with Mr. Meyer that tipping is badly flawed, it is here to stay. The reason? I suspect that tipping is a social norm. Like peanut butter and jelly or love and marriage, it goes with the dining experience…

Even for our daily coffee and that jar on the right-hand side.

My sources and more: Thanks to WSJ for some insight on tip jars. They also told us more about iPad tipping and the tipped wage. Meanwhile Quartz looked at tipping here, here, and Reddit has this EndTipping wiki/FAQ. Lastly, you might read this at GrubStreet or just return to econlife’s Six Tipping Facts post.

Why Kraft's Mac & Cheese Has a Global Warming Problem

The Best (and Worst) Ways to Board an Airplane