The Best (and Worst) Ways to Board an Airplane

I just boarded a jetBlue A320 airplane very very slowly. What should have been a minute on the jet bridge from the gate to the cabin door was 15 minutes.

Most of us want a better way.

How To Board a Plane

We are getting off and on planes much more slowly. In 1968, we deplaned 20 passengers a minute. By 1998, it was down to nine. As for boarding, the speed varies with the plan. Passengers with seats in the rear could go first. With WILMA, we would do window first, then middle seat, and last comes the aisle. Or it could be random.

To simulate different boarding systems, MythBusters did a Discovery show with a mock plane that had 173 seats. These were the times and the passenger reaction: 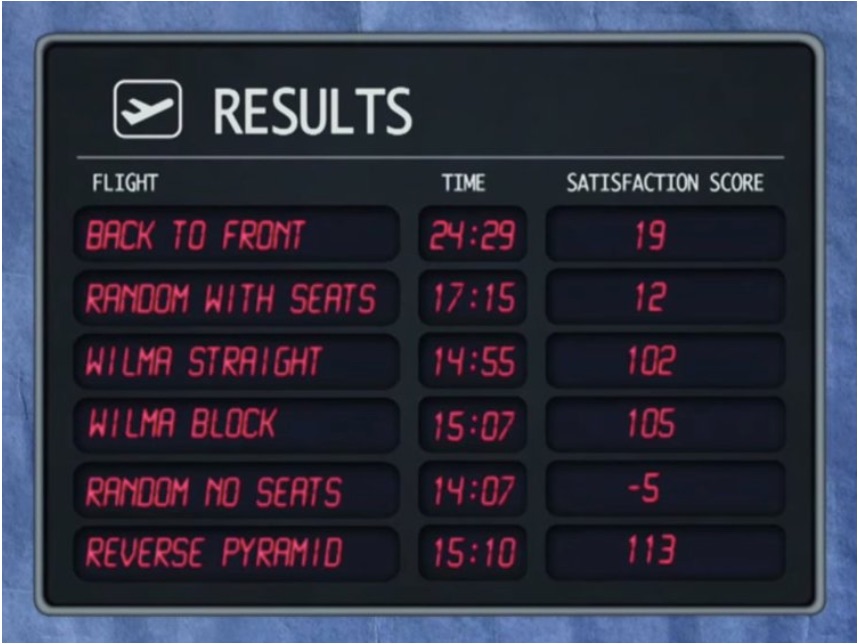 Sadly, the least pleasant was the fastest. (Do you think that people just didn’t like the total freedom?) Meanwhile, at the other extreme, highly disciplined systems like WILMA have potential.

The best analysis, though, came from Jason Steffen, an astrophysicist at Northwestern University. After pondering a slow boarding experience, decided, “I either needed to solve the problem or stop thinking about it.”

So, after concluding that neither front to back nor back to front made sense, he proposed the ultimate in logic. With passengers boarding ten at a time, they should occupy every other row of the window seats at the rear of the plane on the right side, moving from back to front. After that, the left side does the same thing. Below, the numbers indicate the order in which the seats are occupied: 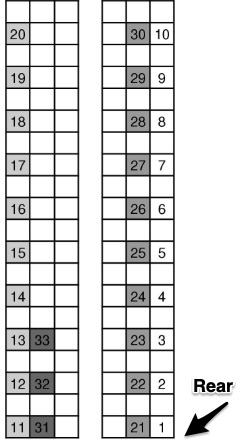 You might enjoy, as did I, how Dr. Steffen connected the mundane task of choosing a seat to a much higher level of analytic sophistication in several proposals. When he modeled Southwest’s  “free-for-all boarding” he used “temperature” to measure a passenger’s “laidbackness.” From there, he cited Boltzmann probabilities and the Fermi-Dirac distribution of seating. Elsewhere, he mentioned Monte Carlo optimization. One goal? To expedite use of the overhead bins.

For us though, it’s all about tradeoffs.

American and United are not willing to eliminate the baggage fees (leading to more in the overhead bins) or the ladder of elites (creating different groups) that shape how they board. Similarly, Southwest has always opted for fast turnaround and simplicity. Whatever you choose depends on what you are willing to sacrifice. It depends on your tradeoffs because choosing is refusing.

My sources and more: WSJ has a “Middle Seat” column that is always good for an airline story like boarding. Then, if you want to read more, I also recommend this Wired article and BusinessInsider for the MythBuster experiment. To complete the picture,  astrophysicist Jason Steffens explains his boarding design (and the work he does).