Six Facts: What We Don’t Know About Tipping

If you are a server, how hard you work to receive a minimum wage depends on where you live. Yes, it depends on your state’s minimum wage. Also though, it relates to the tipping wage. In states with a tipping wage, workers are paid less by their employers because tips are supposed to make up the difference.

The federal government tells us that a “tipped employee” is someone who receives more than $30 a month in tips (unless otherwise indicated by a state).

The federal Fair Labor Standards Act requires a $7.25 minimum when tips and the minimum wage are combined. That means no less than $2.13 for an hourly cash wage. Then tips can make up the balance. (If they do not, the boss is supposed to pay you the difference.)

Paying more to tipped employees, California, Oregon, and Washington (along the West Coast) mandate their minimum wage before tips. Also shaded purple, so too do Nevada, Montana, Minnesota, and Alaska. On the other end we have blue states that range from Texas and Wyoming to New Jersey that observe the $2.13 minimum tipping wage.

4. Where Tipped Employees Earn the Most

Knowing a worker uses tips to reach the state’s minimum wage, fivethirtyeight gave us a reality check. For a typical waiter or waitress getting a 15% tip at four eating establishments, they calculated how many tables for two had to be serviced. Their data came from Eddie V, a premium seafood eatery where you can easily spend $91 and  Denny’s where the tab could be $9.69 for the same number of tables and people. Meanwhile, at Joe’s Crab, the equivalent bill would be $25.42 and Olive garden, $17.50.

At Denny’s a server would need three tables (six customers) an hour for tips and base pay to equal Washington D.C.’s minimum wage of $11.50: 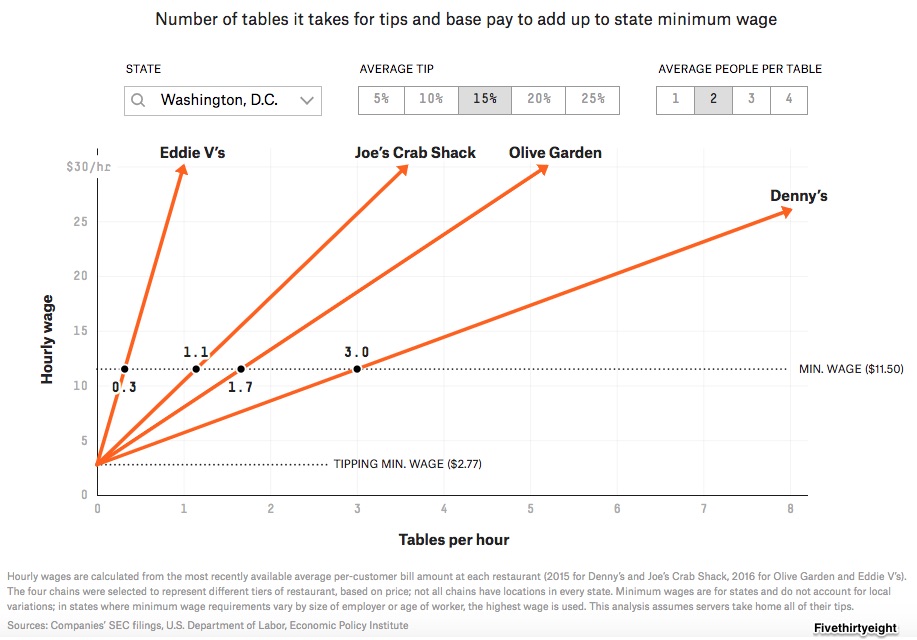 In Colorado, you need just one table of two with a 15% gratuity because their tipping wage and minimum wage are both higher: 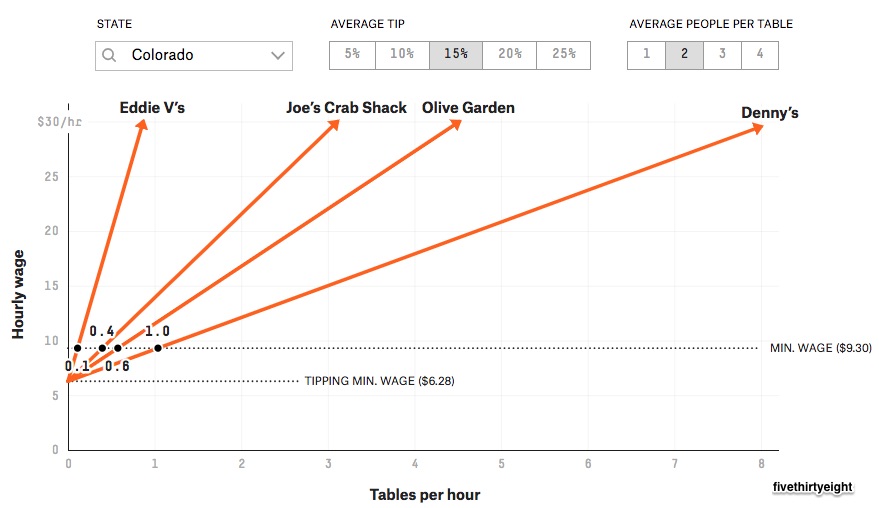 5. Where Tipped Employees Earn Much Less

In Mississippi, you have a low tipping wage and a low minimum wage. So it takes less labor to earn the minimum: 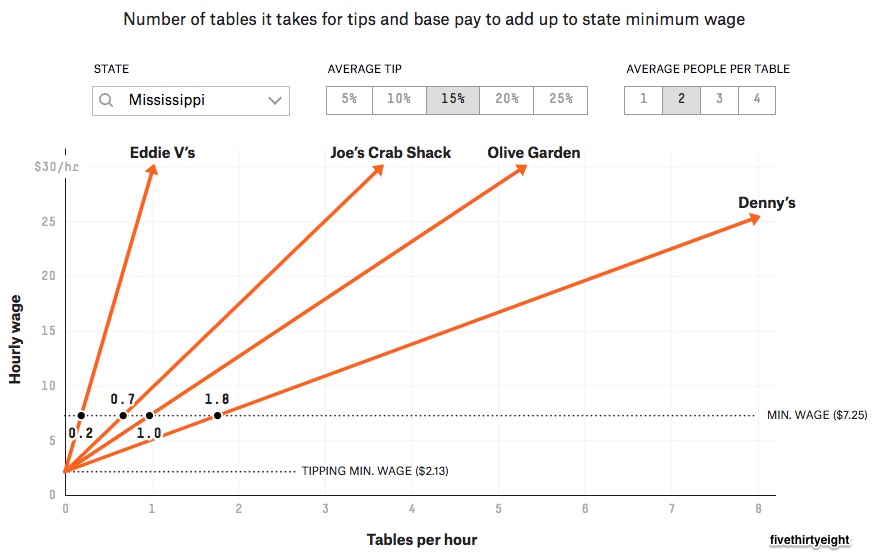 6. A No Tips Experiment

Because of all of the inequities, some people want no tips.

Restauranteur Danny Meyer was concerned with an underpaid kitchen staff. So he replaced tipping with higher prices in several of his upscale eating establishments. With more salaried workers everywhere, he could minimize pay disparities. However, not everyone was happy. Last February he reported that 30% to 40% of his “legacy” (5-8 years experience) front-of-the-house staff left.

So yes, eliminating tipping solves some problems and creates others. It concerns restaurant owners who cannot raise prices and restaurant workers who want their tips. But also, we have have owners who want more egalitarian pay and workers who need a dependable weekly salary. Economists who like to cite tradeoffs are enjoying a bonanza.

My sources and more: This Econtalk podcast on tipping gave the economic connection. But it was fivethirtyeight that was truly interesting. (Do go there for some fun discovering the work time stats for each state.) But if you want the dry facts, the Department of Labor has all you could ever want to know and still more. Finally, to see some real stories about people and Maine’s reversal, Eater  and Citylab are possibilities.

Looking at National Wealth Through a New Kind of Lens