How Social Security Is in Worse Shape Than We Think

Twice last year– during February and August–we shared six facts about Social Security. Now, disagreeing with the Social Security Trustees 2018 Report, economists at the University of Pennsylvania suggest the program is in worse shape than we think.

Social Security is a pay-as-you-go program. Coming from today’s workers, payroll taxes go to today’s retirees. Whenever that revenue is inadequate, money from a trust fund makes up the difference. Oversimplifying for clarity, we can just say that trust fund dollars increase when there is an annual surplus and decrease when money is withdrawn. The Social Security Trustees predict that the trust fund will probably be depleted in 2034.

However, economists at Penn Wharton believe the program’s financial condition is worsening at a faster rate,

The Penn Wharton people predict the trust fund will be exhausted in 2032. Citing retiree bankruptcies, more older people, and fewer young workers, they project a much larger shortfall than the Trustees expect. If that shortfall is covered by the federal budget, the extra money that the nation would have to borrow will create an unacceptably high debt to GDP ratio of 200% (or more) by 2048.

To avoid so dire a fiscal plight and sustain economic growth, they present a menu of benefit reductions and tax increases. Among their options is a payroll tax rate of 14.9%, a taxable income ceiling of $150,000, and a 14.9% rate for income that exceeds $250,000. As for benefits, the more you earned, the less you get. And it all could start later, perhaps at age 70.

The big message? It’s worse than we thought. However, we can preserve the program and economic growth by targeting the affluent with benefit cuts and tax hikes.

Our Bottom Line: The 2021 Turning Point

The Social Security benefits received by 52.45 million people are mostly funded by payroll tax dollars. In addition, the securities the program holds generate revenue as do taxable benefits.

When the money from these three sources exceeds what goes out, the trust fund grows. If not, it shrinks. You can see below that the shrinking starts with a projected decrease of $18.2 billion in 2022.

As the last year with a trust fund increase, 2021 is a turning point. Within 10 or 12 years, it will have nothing: 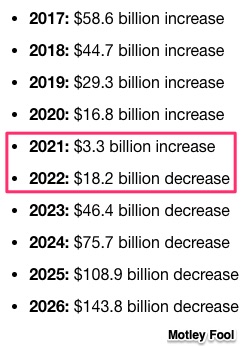 According to the Trustees “intermediate”/middle of the road projection, 2022 is the beginning of the end of the reserve cushion. Only 12 years later, in 2034, it will be gone. Without the extra cash from the Trust Fund, the Congress will need some other way to make up the difference between incoming Social Security revenue and its outgoing benefits.

My sources and more: Referring to the Social Security Trustees Report, researchers at Penn’s Wharton School expressed their growing concern about the future of Social Security in a February 11, 2019 paper and during August. Their Social Security Simulator, though, was the most fun.

This is the intermediate projection in the Trustees report. If you want to see the high and low cost projections, please go to page 48: 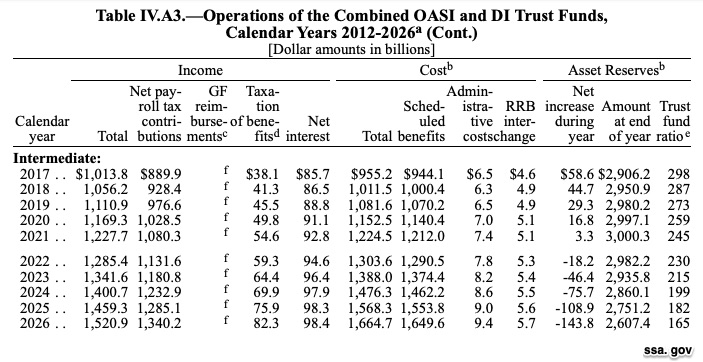 The Case of the Missing Chips

The Mystery of the Missing Jobs