During February, we shared six facts we all should know about the future of Social Security. However, after discovering a paper from Penn/Wharton, I decided I better add another six.

But first, the basics that we always begin with:

Social Security is a pay-as-you-go program. Coming from today’s workers, payroll taxes go to today’s retirees. Whenever that revenue is inadequate, money from a trust fund makes up the difference. Oversimplifying for clarity, we can just say that trust fund dollars increase when there is an annual surplus and decrease when money is withdrawn. Economists predict that the trust fund will be depleted sometime close to 2034.

1.Bankruptcies among the aged have increased.

A large proportion of our aging population counts on Social Security.

With so many elderly people, the system will need more current revenue to pay full benefits.

4.A cash infusion could help to perpetuate current benefits.

6.The federal budget could absorb the Social Security shortfall.

Our six extra facts focus on preserving the benefits currently that Social Security pays. On the funding side we can consider increasing the labor force, boosting taxes, and using federal funding. Meanwhile, on the benefits side, we could raise the eligibility age.

We have three big problems. We need relatively more workers and fewer older people.  But that probably won’t happen. We need people to retire later. But many workers are unable to wait. And we need more revenue. But no one wants higher taxes.

So, when the trust fund can no longer make up the tax revenue shortfall, we will have to act. The year will probably be 2034.

Although we did not look at Medicare today, I thought you might want to get a glimpse of its trust problems also: 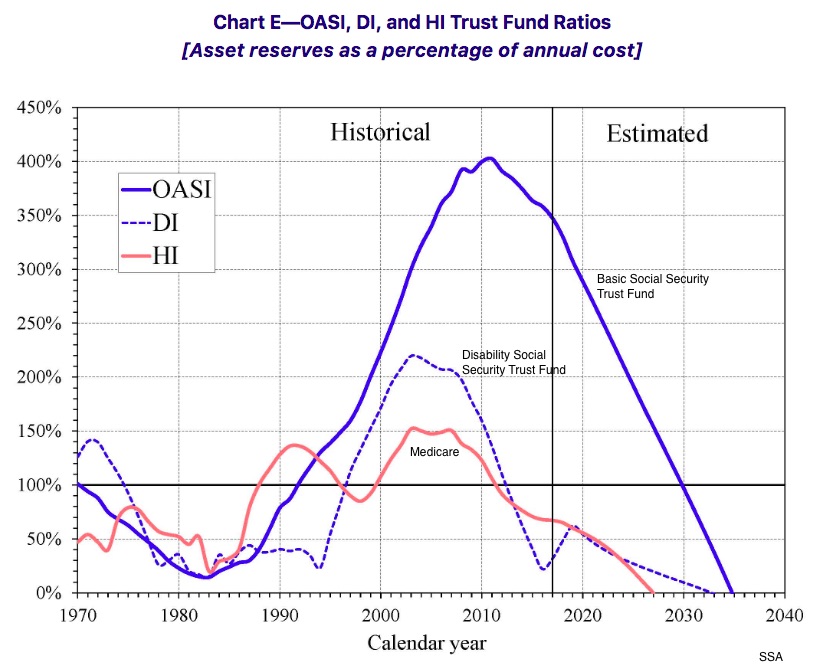 My sources and more: There are two ways to grasp the Social Security problem. This Penn/Wharton budget model has the facts. Or you could just do their simulation to see how you would preserve the program. Then, for specific topics, do go to WSJ,  or an SSA Social Security fact sheet, For a longer look, this Social Studies Primer from Congress is a possibility as is this Social Security and Medicare Trustees Report.

Why We Want a Starbucks Pumpkin Spice Latte