What We Don’t Know About Dirt

Next time you go to a Major League Baseball game or even a local stadium, take a good look at the infield. There’s no such thing as normal dirt anymore.

Where are we going? To how dirt dealers compete for baseball business.

But first, some infield insight…

Our story starts at Slippery Rock University. Located in Western Pennsylvania, the school needed an infield for its new baseball stadium. A nearby dirt dealer, who had never done an infield before, got the job. But then he had to figure out which dirt to use. Bringing samples to the field, he appears to have wound up with a unique silt, clay, and sand mixture.

You can imagine what the goals are. You don’t want “a trail of chunks” from baserunners. You want the surface to remain smooth so the ball doesn’t take some weird hops. Meanwhile the pitcher needs a gloppier mix for a more secure foothold. And then there’s the weather. With a sufficiently absorbent surface, you can minimize the rain delays and cancellations.

DuraEdge Products was the Pennsylvania firm with a new dirt recipe. From Slippery Rock, their business expanded to the Philadelphia Phillies and to other Major League stadiums. The following map shows some teams that have their infields: 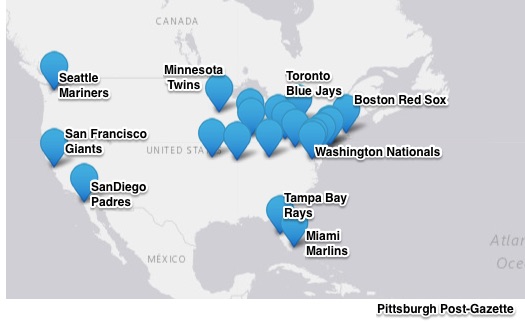 In monopolistically competitive markets, small and medium size firms sell very similar products. So it makes sense that they try to differentiate themselves. If you are in the infield surface business, then you might say your clay is unusual or your silt is special. Your goal is to move to the right on a competitive market structure continuum to get some pricing power:

The result? Even dirt can provide a competitive advantage.

My sources and more: Since we’ve already looked at sand, I was curious about this WSJ article on dirt. And that took me to the Pittsburgh Post-Gazette.