Around Lordi, in India’s Rajasthani Desert, farmers grow the guar bean. For centuries it was a dietary staple. But then Western food processors and pharmaceutical companies realized that guar’s ability to absorb water could come in handy. (It’s the guar gum that keeps the ice cream thick.) 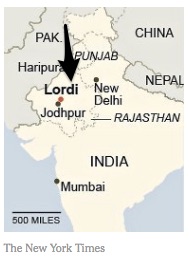 For fracking also, guar is a thickener. Because of guar, the water becomes stiff enough to shoot sand sideways through rock. Once the shale fractures, sand particles keep the cracks open for oil and gas to seep through.

We all know that fracking vastly increased U.S. oil and natural gas production. In addition, it spiked demand for guar and pushed prices skyward. However, with acreage increasing, substitutes emerging, and then fracking demand subsiding, after 2013 (see below) guar markets reversed: 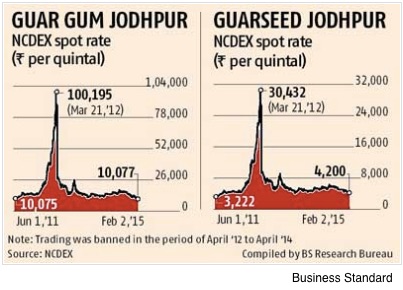 It is rather amazing that more than 13,000 miles from the fracking fields, India’s guar bean farmers, traders and processors thrived like never before. FT called it a bean bubble. Farmers built stone houses and bought tractors. There was more money for trips, for dowries, for elaborate weddings.

Our Bottom Line; Supply and Demand

And as you would expect, when price popped, the supply side had the incentive to produce more and develop cheaper alternatives. Supply (and quantity supplied) increased, demand decreased and guar prices dropped. When oil prices crashed in 2014, the boom truly became a bust.

My sources and more: For all you could ever want to know about the guar bean, do go to the NY Times, here, and here, and to Quartz. Then, for the price update, Business Standard data is here and here. Perhaps most interesting though is seeing how guar’s ups and downs resemble fracking’s sand suppliers.