Our story starts in 1998 with the first emojis and ends now with the Sauropod among the newest.

Nineteen years ago, a designer created 176 images for Japanese cell phone users. But since encoding standards had not been coordinated among mobile carriers, the images received weren’t necessarily what had been sent. You could send a heart while the recipient got a clock.

Where are we going? To why standardization matters…even with emojis.

Where Emojis Come From

Anyone can send the Consortium a proposal for a new emoji. At 99% Invisible they told the story of a yoga emoji. To make it through the initial approval stage, they had to demonstrate that demand already existed and their design was unique. Because no emoji will ever be removed, the concept needed to be long lasting rather than a temporary fad.

The beginning of the proposal: 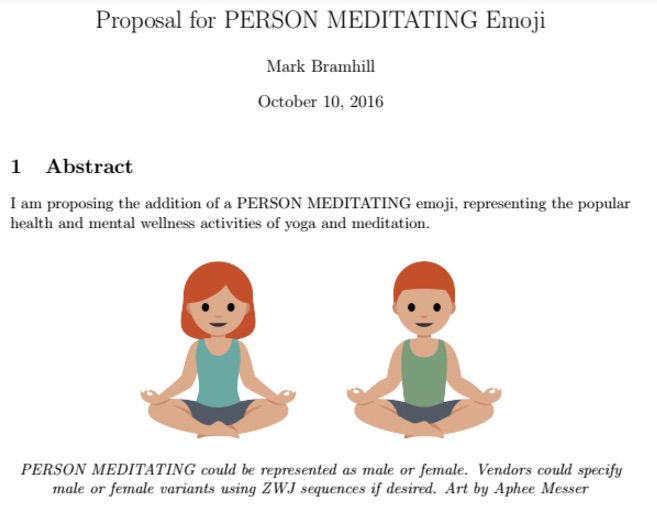 Approved emojis become a part of a universal language. Even when Facebook and Google and Apple create their own variations, they still are based on one shared concept.

Looking back to 18th century France, you can see why all of us need standardization. The size of a pint could have varied by 20% between villages. And that was just one metric. Imagine dealing with many when buying and selling merchandise.

It helped the market considerably when two scientists defined the size of a meter during the 1790s by calculating the distance from the North Pole to the Equator and dividing it by 10 million. Once they knew the size of a meter, they said the kilogram was “a cubic decimeter of rainwater at 4 degrees Celsius.” One result was a platinum kilogram cylinder. But the bigger impact was the standardization of a wide array of weights and measures.

We could say that NIST returns us to the Unicode Consortium. Like all standardized metrics, emojis (even though they do vary) provide a universal language.

My sources and more: As always, 99percentinvisible provided an unexpected inspiration through one of their podcasts. It was also fun to do research at emojipedia and learn more specific info on the Google poop emoji from Fast Company.

Please note that sentences from today’s Bottom Line were previously published at econlife.