Is $3.9 Million the Right Price for a Super Bowl Ad?

In an ad for the (Super Bowl) ad, Stephen Colbert talks about Wonderful Pistachios.

Fox said its Super Bowl TV ad inventory (estimated at 65 spots) for the game is sold out. According to Ad Age, that inventory included 30 seconds during the first unscheduled time-out (Cheerios), 60 seconds after the third quarter kick-off (Audi), 2 60-second ads in the first half (Chevrolet) and one 30-second ad during each half (GoDaddy). Anheuser-Busch InBev plans 3 ads for Bud Light and 2 for Budweiser, H.J. Heinz took 30 Super Bowl seconds for the first time in 16 years, and we will see Stephen Colbert for Wonderful Pistachios twice during the game in 2 second quarter 15-second spots.

Higher by far than any other TV ad, the average price is reportedly $3.9 million for 30 seconds.

It makes sense that an audience of somewhere near 108 million men and women, some of whom (like me) are more interested in the ads than the game, would be worth a lot. Businesses perceive the Super Bowl as a unique opportunity to build brand awareness, increase sales and buoy their stock price. A University of Wisconsin study actually concluded that from the Monday before the Super Bowl to the Friday after, the stock price of firms with Super Bowl ads outperformed the S&P by 1%.

Fox, meanwhile, can behave like a monopoly, become a “price maker,” and implement monopoly pricing. But still, as with all monopolies’ demand curves, there is some price elasticity. E-Trade for the first time since 2007 has said we will not see their talking baby because the $4 million will be “reallocated.” 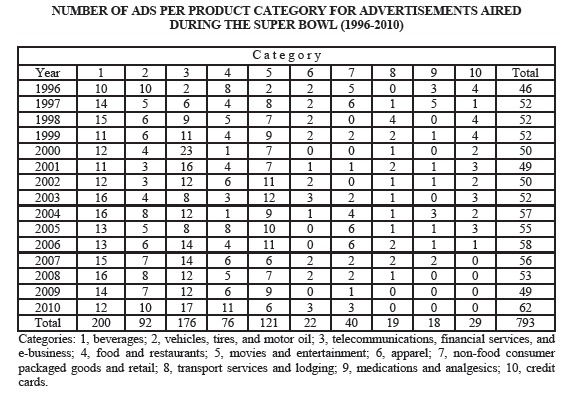 Sources and Resources: I especially enjoyed the Super Bowl facts in these Ad Age, Atlantic (source of first graph), and LA Times articles. Then, complementing the print media,  Freakonomics had a good video interview of an ad executive and the University of Wisconsin researchers provided an in-depth not entirely convincing correlation (source of above chart) between the ads and the market.

More Women in the (Restaurant) Kitchen

One City With More Air Pollution than Beijing