A Bitcoin Story With The Right Incentives and the Wrong Results

Almost a year ago, bitcoin became legal tender in El Salvador. But even with the right incentives, it did not quite work out as they expected.

El Salvador had some pretty good reasons for wanting bitcoin to be what people spent. In a country where the majority have no credit or debit cards, no bank accounts, and no mobile banking, a digital currency could transform all transactions. Most crucially, it could increase financial inclusivity and perk up economic activity.

Through a bonus worth $30 and a discount on gasoline bought with bitcoin, El Salvador created the incentive to use the new currency. Mandating that businesses accept it, they made sure people could spend their $30 cryptocurrency windfall. In addition, rather than charging a fee, the bitcoin ATM and dollar conversions were free.

It all began with an initial surge when 50 percent of all households downloaded the Chivo Wallet (digital) app and many spent the bonus it included. Still though, one fifth of the individuals with the app have not yet spent all their bitcoin, most businesses refused to accept it, and, among the 60 percent of those that spent their app’s bitcoin, no new transactions followed the first free ones. Instead, the consequences were unintended. Young, educated, relatively affluent men used it as their currency, not the average population.

Below, you can see how much bitcoin was unpopular: 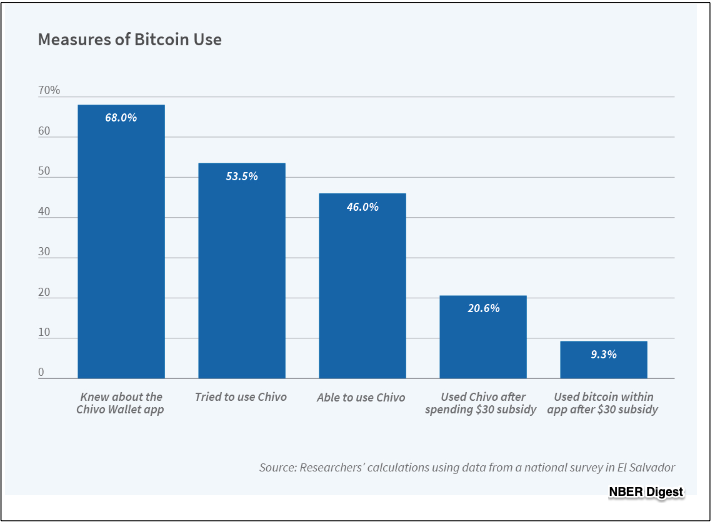 Asked why they did not use the new Chivo app, non-adopters said they preferred cash. Some also did not trust bitcoin or the app, or technology, or did not own a phone.

I suspect though that it it all comes down to the characteristics of money. We tend not to believe a commodity is money unless it is a medium of exchange, a unit of value, and a store of value. In El Salvador, mandating its acceptance implied that people really did not believe it was a medium of exchange. Then, seeing its value rise and fall, it was easy to question its current and future spending power.

Indeed, as much as El Salvador has tried to give bitcoin its crucial characteristics, only a young male population (that did not need to be persuaded) was convinced.

My sources and more: My monthly NBER Digest email always comes in handy. This month I learned about El Salvador in their summary and the linked working paper. Then, taking the next step, this CNBC article connected bitcoin to El Salvador’s debt.

Where Inconspicuous Consumption Is Rather Obvious