Where Shrinkflation Is Retail Camouflage

Because our ribeye steak is close to 40 percent more expensive than a year ago, we’ve switched to ground beef. According to a meat man at an Alabama supermarket chain, his customers are also buying bone-in chicken instead of boneless and upping their purchase of pork products.

The BLS (Bureau of Labor Statistics) confirms the price hikes. With a 10.5 percent increase during the 12 months that preceded last September, the big bite came from meat, poultry, fish, and eggs: 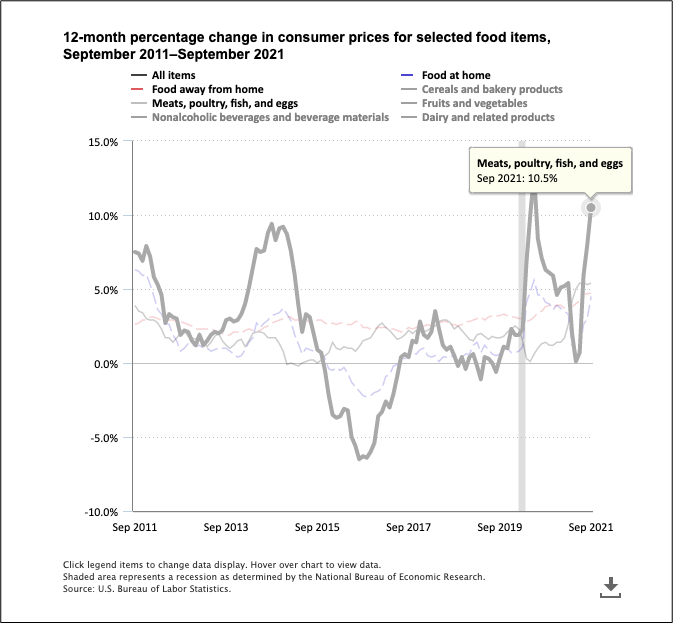 Absorbing higher raw material and distribution costs, food makers are charging more. They do though have a second alternative. It has been called retail camouflage.

The Washington Post told us that Maurice the cat noticed when his can of cat food went down from 5.9 ounces to 5.1. His owner also was quite aware that he continued to pay $81 for a biweekly order. Similarly, a roll of Walmart’s Great Value towels diminished by a whopping 48 sheets from 168 to 120. The price remained at $14.97 for a dozen pack.

Below, the images of Apple Cinnamon Cheerios reveal a reduction to 19 ounces rather than 20.1. While that 20.1 ounce box actually gained one half inch, it lost the equivalent of one bowl of cereal. Similarly, the other four General Mills cereal boxes have less inside. I added the ounce info:

The list is long at mouseprint.org. Ziploc went down from 54 to 50 bags in a box. Costco-Kirkland toilet paper reduced its roll from 425 to 380 sheets. That means their 30-roll package lost 10%–the equivalent of 3 rolls. Even sardines have been hit. Like Ziploc and toilet paper, the price remained the same but a can shrunk to 3.75 ounces from 4.375.

Economists have hypothesized that consumers care more about rising prices than shrinking packages.  Paying much more attention to price (and the law of demand), we monitor inflation. Not only are we aware of its ups and downs but also we perceive the original price as an “anchor” that influences our response to the price increase. By contrast, quantity is less of an anchor.

Because one study even concluded that we are four times more demand sensitive to a price hike than a size cut, we can understand why Walmart was willing to make its Great Value towel rolls less of a great value.

My sources and more: This week, WSJ reported our response to higher prices as did NPR and The Washington Post. However, the best place to go for a treasure trove of up-to-date facts is Edgar Dworsky at Consumer World. Of course though, we always check the BLS as we will today for the newest CPI numbers. Please note that some parts of today’s Bottom Line were in a previous econlife post.

Reducing Your Carbon Footprint By Not Eating Local