Forty percent of the box, however, was empty: 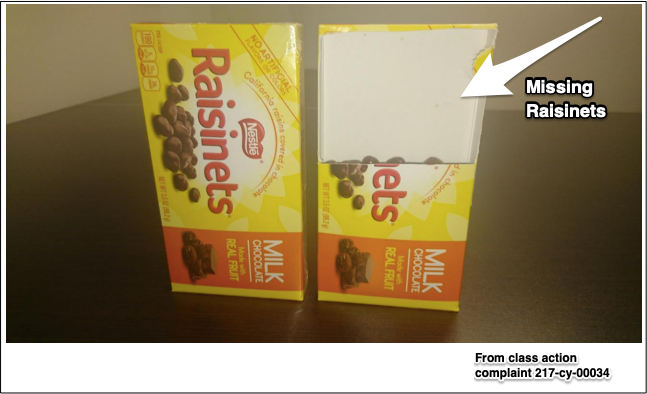 In a California federal court, Nestlé SA had to defend its air-filled boxes of Raisinets. Claiming the packaging was deceptive, the plaintiffs sought $5 million plus expenses. They said they would not have bought the candy at that price had they known there was so little inside.

Federal law says a package’s slack fill–the empty air–needs to be there for a reason. With potato chips, you need slack fill to keep them from crumbling. The lawsuit asserts that Raisinets are not “susceptible to cracking, breaking or crumbling like potato chips in a bag would be.”

Now, two years later, the parties decided not to wait for a court judgement. Instead they had a three-part agreement. Anyone involved with the class-action suit can accept a maximum settlement of $8 (50 cents a package with a 16 package max). But, if they don’t want their $8, they can object or opt out.

Any class member can receive the $8:

Nestlé is not alone. Class action suits for misleading packages and labels have multiplied. The long list includes Mondelez’s Sour Patch Watermelon boxes, McCormick for slack fill in pepper containers, and KFC for its 8-piece bucket of chicken. A case against Wise chips was dismissed as was the KFC 8-piece chicken suit. With KFC, the plaintiff claimed that while she got her eight pieces of chicken, the real thing looked smaller than the ad. Initially asking for $20 billion, she later reduced the amount to $9,999,000.

At this point, an economist would remind us that most of us make decisions at the margin. Defined as the (imaginary) line that divides what we do and the extra we might do, the margin is where we decided to snooze for 10 more minutes and eat an extra scoop of ice cream. Business people should be aware of marginal cost and marginal revenue when they make their decisions. After all, it makes no sense if the cost to make an extra item or of an hour of labor exceeds the extra revenue that is generated. In an economics course, we just say that the profit maximizing point is where MC (marginal cost)=MR (marginal revenue).

For slack fill, of course the decision is at the margin. With the Raisinets and the box, Nestlé’s executives had to decide how much.

My sources and more: For our update on slack, the story of the Raisinets case is here, here, here, and here. Then, WSJ had more about the unhappy lady who sued KFC for her 8-piece bucket. But if you really want to know why California has became the “Food Court,” do take a look at Vox.

Where Shrinkflation Is Retail Camouflage