How Skateboarding Took Us Closer to Gender Equity

We could first see the X Games during the summer of 1995. As a showcase for extreme sports that ranged from mountain biking to bungee jumping, the X Games pulled together an unrelated group of athletes.

Yes, they included the female skateboarders…but not entirely.

In the men’s competition, the prizes ranged from a winner’s $50,000 to $2,000 for last place. For the women, the top prize was $2,000. In addition, giving the women no recognition, ESPN aired only the men’s skateboarding competition during prime time. In 2005, just before an event, the women decided not to show up. Responding, X Games officials agreed to discuss their grievances if the women competed. They agreed. At the meeting, (rather typically) the Game’s organizers and ESPN executives said that the female skateboarders were less interesting to watch than the men.

Please take a look at the top competitor from those years. You decide if Cara-Beth Burnside is uninteresting:

Within several years though, in October 2008, the X-Games said that every competitor, no matter the gender, would get the same prize money.

However, the battle is not close to being won.

Researchers at Adelphi University created the ideal summary of the sports gender pay gap. While I was concerned that the data is from 2019, not much has changed.

In selected sports, they looked at 2019 average player compensation:

Through a January 2020 agreement, the Women’s National Basketball Association got a 50/50 revenue sharing split with the men (NBA). As a result, average female player salaries climbed to six figures:

But not very much has changed for the gender pay gap at the top:

Whenever women receive inadequate recognition, pay, and respect, the impact ripples to other women: 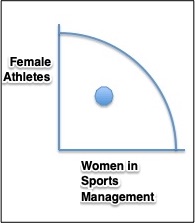 From there, it can create an expectations bias that constrains women elsewhere and thereby impacts the home, business, and politics.

My sources and more: All of today’s facts about the gender pay gap came from a wonderful skateboarding podcast and Adelphi University. For more about sports gender equity, do take a look here at econlife.

Where We Are Sure of Economic Uncertainty

Where the U.S. Is Shrinking