What to Do About an Elephant in Your Backyard

If you are wondering what to feed an elephant that shows up on your doorstep, try corn on the cob. They don’t like pineapple.

In Southwestern China, people are actually asking what to offer a wandering herd of elephants. They also want to know why those animals left their reserve.

An economist would have some answers.

Our story starts in March 2020 when 16 elephants left their reserve in Southwestern China. Now, nibbling and trampling, they’ve traveled more than 300 miles. After passing out from too much alcohol, one baby found the herd the next day. Others have  entered car dealerships and villagers’ homes, and kicked storeroom doors open to steal hoards of corn. As of June 8, the damage totaled close to $1.1 million.

Do take a 3-minute look at the elephants’ journey. The mom (I assume it was a mom but who knows?) lifting her baby out of a water ditch was especially adorable:

Even for an elephant, they’ve gotten rather fat. According to one scientist, a male adult Asian elephant can weigh as much as 4 tons. However, during their trek, a new diet with more sugary food and other goodies, has added the pounds. On a 1 to 5 scale, with 1 a light elephant and 5 the heaviest, the wandering herd is close to 4.

While Southwestern China’s rubber and tea plantations contributed to economic growth, as they spread, deforestation diminished the elephants’ habitat. Between 1975 and 2014, the elephants’ distribution area decreased to less than one third of its previous size. Then, further destroying the area’s ecosystems, we have farmers’ pesticides and herbicides.

This map from a paper in Nature on the conflict between conservation and development shows where elephant distribution areas diminished. The brown outline takes us back to 1975 while the yellow regions, vastly smaller, are for 2014: 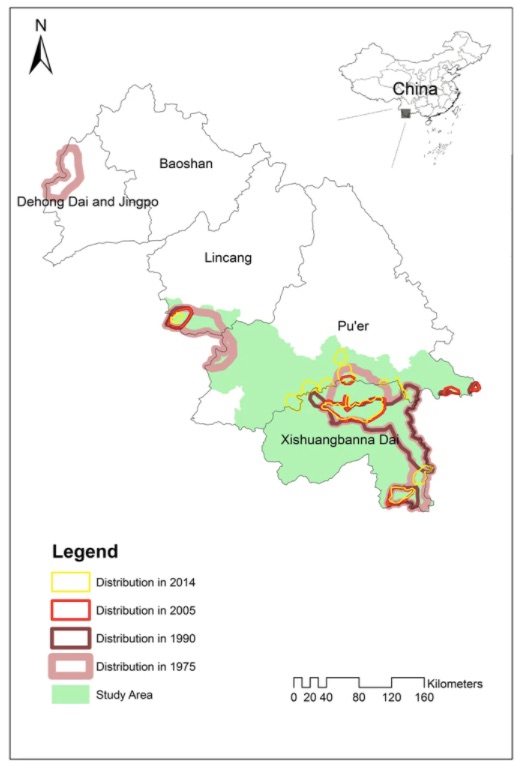 So yes, we have a tradeoff between development and conservation and the reason why 16 elephants might have left home. Thinking of tradeoffs, economists like to say there is no such thing as a free lunch. I suspect though that the elephants are getting qute a few.

My sources and more: While multiple media have been following the travels of the elephant herd,  WSJ and CNN best conveyed the human-elephant conflict. Then, taking the next step, this academic paper provided the history and suggestions for the future. Our featured image is from HU CHAO/XINHUA/ZUMA PRESS.

June 2021 Friday's E-links: From an Amazing Trunk to a Dustbowl Saga