Every five years Air New Zealand is required to have a “weigh day.” Before boarding, passengers have to step on a scale. 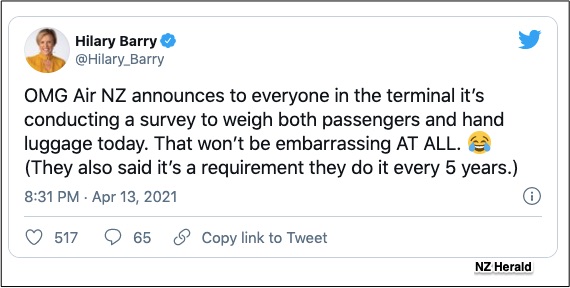 As you would expect, airplane weight matters for liftoff, for fuel depletion, and for financial planning.

If you fly on American, they will assume your summer weight is 182 pounds, eight pounds more than last year. For winter. their number is 187 because of  heavier clothing and personal items. At the same time, carry-on bags will get an extra four pounds and checked luggage, five. American’s numbers will account for flights that tend to have more men than women and some children. They do not involve the calculations they sometimes make for sports teams and “atypical” passenger populations. Commenting, American assured us that most flights were okay although some would need larger aircraft or limited ticketing.

Meanwhile, Alaska Airlines last considered weight in 2013. After a nine year silence, they announced that average adults would  become 7 pounds heavier while they would add an extra 2 pounds for carry-ons and 4 pounds for checked luggage.

Too soon for some, the airlines have a June 12 FAA deadline. Including clothing, people, and phones, the old numbers are off by 5 to 10 percent, a discrepancy that will count when planes take off in hotter temperatures or higher altitudes and also with stiff headwinds. Salt Lake City, Phoenix, and Denver are among the cities that could be most affected.

As economists, plane weight makes us think at the margin. Defined as the point where something extra is added, the margin is where we make our decisions. That is where we decide if we want to eat an extra slice of pizza or snooze an extra 15 minutes. It is also where we decide what to add to a plane we say is empty but has seats, avionics, and coffee makers. From there, the calculations begin. They need to decide how much extra the passengers, the fuel, the cargo can add.

In many ways, Air New Zealand’s Weigh Day is marginal.

My sources and more: Always interesting WSJ’s Middle Seat column grabbed me yesterday. From there, it was fun to read about Air New Zealand’s “weigh day” and the other airlines like Uzbekistan Airways and Finnair that have them.

What to Do About an Elephant in Your Backyard