We cannot say for sure that colors cause a change in car prices. But they do correlate.

Think of a beige SUV and a beige pickup. In three years, beige SUVs lost 46 percent of their value. At the same time, beige pickup trucks, at 18 percent, were down by much less. We can theorize that SUV buyers want more pizazz. The truck owners, though, are more practical. Beige shows fewer dings and more of a business name or logo.

Analysts have said that color preferences vary from state to state, among individuals, and for different models. During 2017, your Mazda MX-5 RF in “Soul Red Metallic” would have cost $35.901 and resold in 2020 for approximately $24,112. Meanwhile, the resale value of the same car in “Gray Metallic” paint was closer to $23,066. Similarly, silver scored lower when purple Jeep Wranglers retained more value. And people who bought a Porsche 911 Carrera GTS were willing to pay an extra $3,140 to get “Carmine Red.”

CarMax told us some state-by-state favorites: 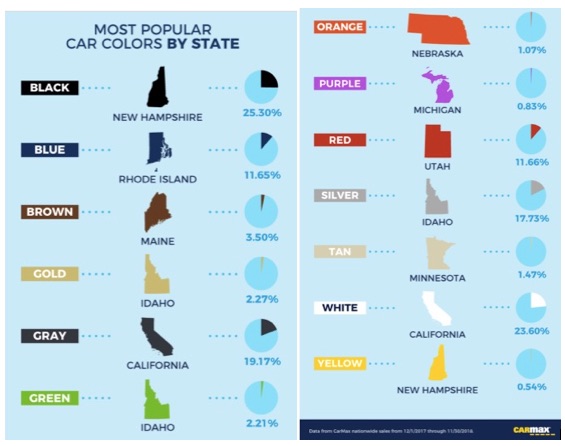 But still, if we had to select one color that has historically been most popular, it’s white. Ford has “Oxford white,” Chevy, “Arctic White,” and Toyota “Super White.” If you live somewhere hot, white could be cooler. In one study, a silver car (a light color so maybe white is similar) left in the sun next to a black car was 10 degrees cooler. However, if you do not want your car to be stolen, then you should choose a less popular color like yellow.

This all adds up to the value of a color. In one study, 91 percent of all buyers said they cared about color when selecting a car. And 39 percent said they would switch brands if they could not get the color they wanted.

Our Bottom Line: Power of the Market

We’ve come a long way since Henry Ford’s Model T was available only in black. Less than a decade later, colors became a marketing tool, first from GM and soon after Ford followed. By the 1950s, a dozen colors were available and then psychedelic hues, glossier finishes, a wet look, and the rest is history.

As our choices multiplied, car dealers and consumers had more decisions. But, as always, we had the market’s supply and demand determining the prices and quantities that reflected the colors we preferred.

Returning to where we began, as economists, we can say that the market selected beige for pickups but not for SUVs. And now, the Kelly Blue Book says to pay attention to “Dark seltzer, Redolent red, and Abstraction blue.”

My sources and more: The NY Times had the best article on car color. It is a column that is always interesting. From there, I took a peek at Edmunds, here,  here, and here, and McKinsey. Finally, CarMax had the (probably unscientific) statewide studies and the Kelly Blue Book, the most up-to-date data..