A Single-Payer Primer From the CBO

The CBO (Congressional Budget Office) just published a single-payer primer. Their goal was to focus on design possibilities and the choices they would require.

They start by telling us that a single-payer system typically involves:

They name the participants:

They show us what six selected countries have done. Below you can see approximately one half of their table: 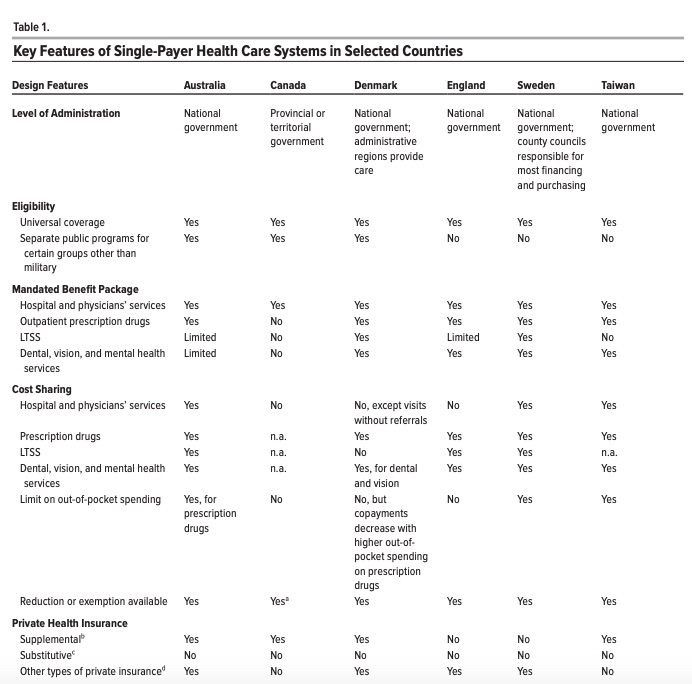 Soon after, they pose 11 big questions and a menu of answers.

1.  Administration: How to run the program?

It could be federal, state, and or local government. For the federal government the role could be total immersion or broad oversight. It could be top down like Medicare or state-based with grants like Medicaid. The one overall necessity would be a technology overhaul that standardized and coordinated the information infrastructure.

2. Eligibility: Who is eligible and how to enroll?

We can assume that all citizens are covered and then consider non-citizens. There could be separate targeted plans for groups like veterans, indigenous people. people in prison. However, we would have to decide who could opt out, if they could buy private insurance, and whether they still would have to contribute to single payer.

3. Coverage: What should be covered?

The coverage list would most likely include major medical, hospital, mental health, diagnostic tests. Also, prescription drugs, dental, vision, hearing are possibilities. And after that, the system might or might not cover new technologies and treatments, home and long term care.

4. Cost Sharing: Who pays for what?

As for money, recipients could pay nothing or a co-pay when they received care. It would also be possible to charge only for lower value services or to base all on affluence. You could have a deductible or an out-of-pocket maximum.

These were the other questions:

6. Existing Programs: How would other public programs connect?

7. Supply side: How to select providers?

8. Ownership: Who would own the hospitals and employ people?

9. Payment Rates: How to decide the basis for payment?

10. Prescription Drugs: How to purchase and price?

11. Finance: Where could the system save money?

Our Bottom Line: One Sixth of the U.S. GDP

Healthcare is one sixth of what we spend in the U.S as consumers, businesses, and governments.

The final question then is how does single payer shift that spending? Would the new system be financed by health insurance premiums? By out-of-pocket cost sharing? From taxes? Would it have a progressive bias with higher income households paying more? Would it be simple to administer?

If we pursue the single-payer option, the new incentives and tradeoffs will have one definitive outcome: the unexpected.

My sources and more: If you want to read the whole 34 page CBO single payer analysis, do go here. (It’s not a bad read.) But for the shorter version, I suggest Kaiser Health News.