How to Pay For a $1.9 Trillion Package

Through massive pandemic aid, the 2020 CARES Act ballooned the federal deficit. With spending far exceeding revenue, the difference was $2.8 trillion: 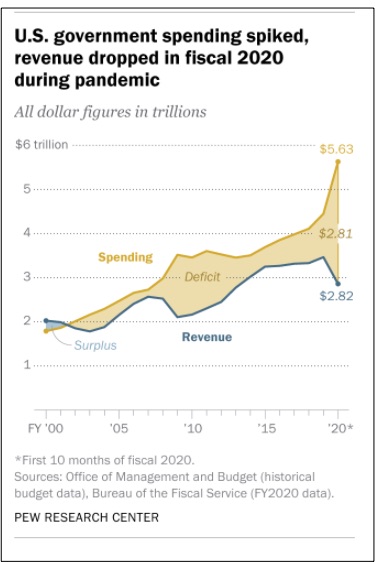 Now, President-elect Biden has proposed a new $1.9 trillion relief package. It includes payments to Americans who earn up to $75,000, expanded unemployment benefits, aid to municipalities. Vaccine distribution and expanded testing will also receive support as will schools working to reopen.

The deficit will soar. Let’s see how we can pay for it.

When we think about funding the deficit, we can focus on the revenue side. At the moment, a spending decrease might not be an option.

In its December 2020 report, the CBO (Congressional Budget Office) presented budget balancing whats and whys. Focusing on the majority of the budget that is mandatory spending, they include 32 suggestions. The big ones though all relate to the entitlements that we need during and after a pandemic. We could not cut Medicaid or Medicare or Social Security. They then continue onward to discretionary spending cuts. The big one there is the Department of Defense, also probably a non-starter.

That takes us to their fourth chapter on Revenue.

There are 31 revenue boosting options: 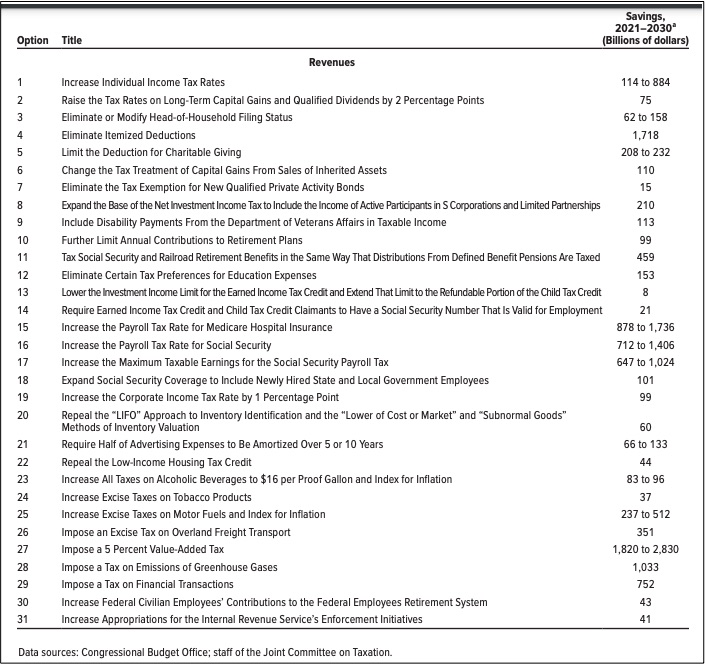 From this long list, the items that would make a big difference are the individual income tax, payroll taxes for Medicare and Social Security, and a value added tax.

The income tax option includes three alternatives that depend on how much to target the affluent. After the 2017 Tax Act expires in 2025, tax rates could revert to 2018 levels. Alternatively, all tax rates on ordinary income could go up by one percent. It is also possible to raise rates on the top four brackets or just the top two.

Lastly, the third big item would be an entirely new tax. Called VAT ( a Value Added Tax), this tax hits each stage of production on the supply side. As a pretzel, for example, materializes from wheat to flour, to a pretzel, it would generate a tax that each wholesale producer pays. One possibility is a broad based five percent VAT that is gradually phased in.

We can ask if the Congress will levy tax increases soon after so cataclysmic a dip in economic activity. If they choose not to, then they can continue borrowing more and more. Low interest rates make it more likely. However, high or low, still, interest expense adds to the budget and the deficit.

Even if taxes do go up, more spending will surely mean more borrowing. It means selling more government securities to you and me, to businesses, banks, and countries.

So, to decide whether our borrowing is affordable, we need to compare it to the GDP. After all, borrowing $1 million for a mortgage is irresponsible if you earn $75,000 a year. However, if your annual income is $10 million, then the loan is quite manageable.

Similarly, we can judge the size of our debt through the value of the goods and services we produce–our GDP. Somewhat like a mortgage, when you borrow too much, you have to allocate too many of your resources to interest payments. Also like a massive mortgage, too much debt can prevent you from responding to emergencies. But when you have a Goldilocks debt (not too high or too low), then it can be beneficial.

Recently the federal debt-to-GDP ratio touched a high of 136 percent. We can expect it to climb further: 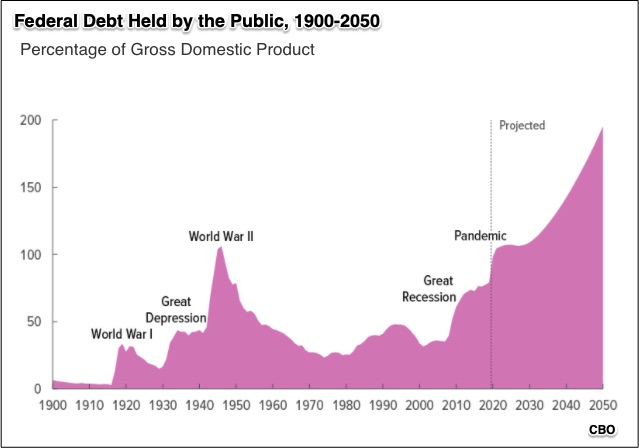 This leaves us with the tradeoff. While the ratio is not quite Goldilocks, we need the pandemic spending.

My sources and more: The CBO, here, here, and here, is always a handy source for insight about the federal deficit and debt.  Then, Pew Research provided some complementary information and The Washington Post detailed the Biden proposals. Please note that parts of “Our Bottom Line” were in a previous econlife post.

January 2021 Friday's e-links: From Cheetos, to an Earthquake, to a FactTank