In the world, the average lifespan for men is 71.3 years and women, 75.9. From there, in a new paper, researchers concluded that COVID-19’s premature mortality rate created a total of 20,507,518 lost years and, an average of 16 YLL per death. When COVID was compared to traffic fatalities researchers calculated its YLL was 2 to 8 times more. For the seasonal flu, it was 2 to 9 times the YLL.

Grouping fatalities by age, the study reported that people older than 75 accounted for 25% of the YLL total. Meanwhile individuals who were 55 to 75 were 44.9% of the lost years and those younger than 55 represented 30.2%.

By gender, researchers found that, with a YLL 45% more than women, men needed more intensive care. Especially in lower income nations like Peru, Cuba, and the Dominican Republic, men were more likely to perish than women. However, the ratio was more equal in higher income countries that included Canada and Finland.

The graphs in the report were riveting. This one lets us compare the disparate impact on the young and the old in 81 countries. It summarizes the proportion of years of life lost by age group: 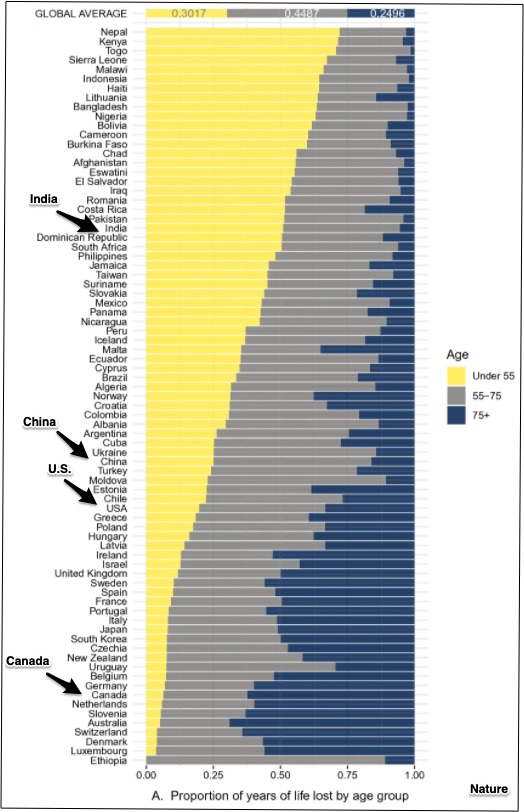 In its “Graphic Detail,” The Economist also took a look at excess deaths–the numbers beyond what had been normal mortality rates. I copied the top 10 and bottom 10 in a list of 69 countries: 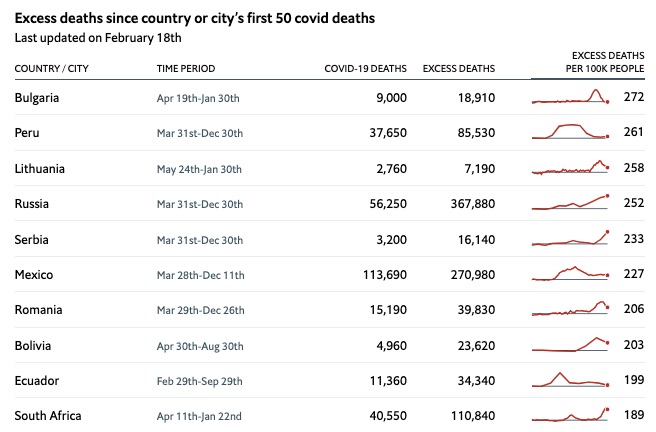 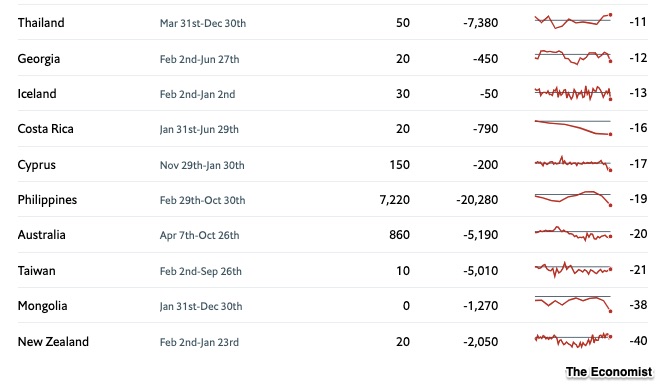 Next, for a different perspective, we can compare COVID-19 to past pandemics.  In this Washington Post graphic, the larger circles represent the highest mortality rates for the world’s major pandemics:

We can also ask about the pandemic’s probable economic impact. Through its December 2020 recovery projections, The Economist concluded that the Philippines and India were most vulnerable: 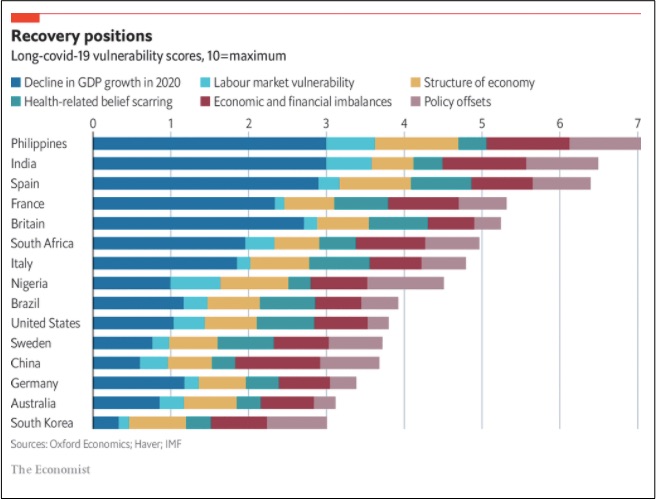 Among the developing nations, the Philippines topped the list because of its high unemployment, labor skills shortages, and dependence on tourism. Meanwhile, in the developed world, the U.K., Spain and France could bounce back more slowly than Sweden, the U.S., and Australia. Even neighboring countries diverge as might France and Germany.

A behavioral economist might say that we have been providing reference points for judging the severity of COVID-19. Reference points come in handy as a tool for assessing an event or a decision. With gasoline, for example, a previous week’s price of $4.00 a gallon makes us feel that $3.50 is a bargain. But if the price beforehand had been $3.00, then $3.50 looks astronomical. Similarly, at work we will be unhappy with a 5% raise when an associate gets 7%. If our stock portfolio plunges, we don’t feel so bad if the S&P declined even more.

So where are we? No matter what the comparison, the COVID-19 pandemic is massive.

My sources and more: Having just gotten a subscription to Business Insider, I decided to take a look and found out about the new COVID-19 mortality study. From there, our statistics on past pandemics came in handy as did The Economist’s Daily Chart on economic vulnerability. Then finally, in a past econlife, we considered the pandemic impact on interest rates, wages, and investment.

The Thousands of Marvel Superheroes We Will Meet