The Economist created the Big Mac Index in 1986 to compare the price of the Big Mac in different countries. Their goal, they said, was to make exchange rate talk more “digestible.”

However, the January 16 Index also generated some mystery.

Only six months ago, at #2, Lebanon was close to the most overvalued currency in the June 2020 Big Mac Index:

What was the Big Mac Index saying about Lebanon?

First, some background, then an answer…

During a trip around the world, a Big Mac’s price varies from country to country. Take for example a Chinese Big Mac during December, 2020. At 22.40 yuan, today’s U.S. equivalent would be approximately $3.46. But the Big Mac sells for approximately $5.66 here. So the yuan in undervalued.

When we compare the price of Lebanon’s Big Mac to the dollar, we see a hugely undervalued currency. Displaying a whopper of a difference, the price of the Big Mac in Lebanon actually increased from L£9,000 ($5.95) to L£15,500  between June and December 2020. However, the value of the Lebanese pound nosedived. As a result, the new price reflected a massive drop when compared to the $5.66 we pay for a U.S. Big Mac.

According to The Washington Post, during one week in June, the Lebanese pound lost 40 percent of its value, a slide (78 percent) that began during October 2019, when banks first limited dollar withdrawals and then closed for several weeks. A sign of economic distress, the restrictions reflected dollar shortages. At that point, because of the currency crisis and coronavirus lockdown, an economy that had already been severely dysfunctional, froze. Although there is an official dollar conversion rate, the Big Mac indicated what is really happening in Lebanon.

Our Bottom Line: The Strength of a Currency

If a burger is selling for more than the local currency equivalent of $5.66 (U.S. Big Mac price), it is overvalued. Less means the opposite. Because a euro area burger averages $5.13 (€4.25) at the current exchange rate, it is undervalued when compared to the dollar.

Based on the January 2021 Big Mac Index, except for Lebanon, we can get the most burger for our buck in Russia. At the equivalent of $1.84, a Big Mac in Russia is less than one-third the $5.66 U.S. price. On the other hand, getting the least for our buck, a Big Mac in Switzerland would require $7.29 in U.S. dollars.

This Big Mac Index displays the global strength of the U.S. dollar (and tells us to take a closer look at Lebanon): 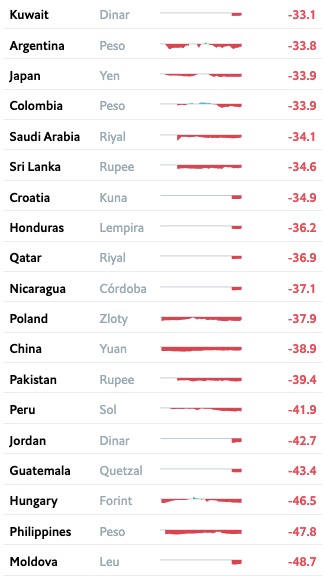 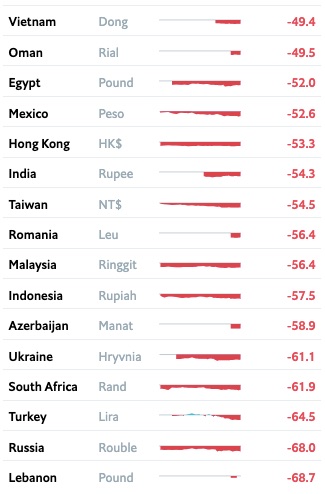 Knowing if a country’s currency is over- or undervalued provides clues about their exports. Perhaps solving another mystery, it tells us why their goods and services might be increasingly attractive in global markets.

My sources and more: The January 2021 (and other years) Big Mac Index is described here. Meanwhile, The Washington Post told us what was happening in Lebanon. Please note that when I tried to convert Lebanon’s pounds to dollars with the current price, I could only access an official rate that gave me a higher price for the Big Mac. Does anyone know the actual price? I also recommend Timothy Taylor’s discussion of the Big Mac and PPP in his Conversable Economist blog. All graphics are from The Economist.

Our Weekly Economic News Roundup: From Consumers to the Congress