Several months ago we looked at how recipients spent the money they received from the March 27 CARES Act. Now, with a new NY Fed survey that is more up-to-date, we can predict the response to the Biden proposal for a third round of stimulus spending.

But first let’s take a look at how qualifying adults spent their first $1,200 checks and the extra $500 they got for each child.

The Impact of Stimulus Spending

In a June 2020 survey, recipients of the first round of stimulus checks said they spent an average of 29 percent of a $2,400 (median) payment on essentials, non-essentials, and donations. Essentials included daily living expenses while non-essentials, are items like vacations and leisure activities. Meanwhile the remaining 71 percent was used to save and reduce debt.

As you would expect, the decisions varied with age, education, and income. Older people spent more on essentials as did households with less income. But it was the non-white lower income households with less education or an income shock that had the greater tendency to pay down more debt.

This chart summarizes the study: 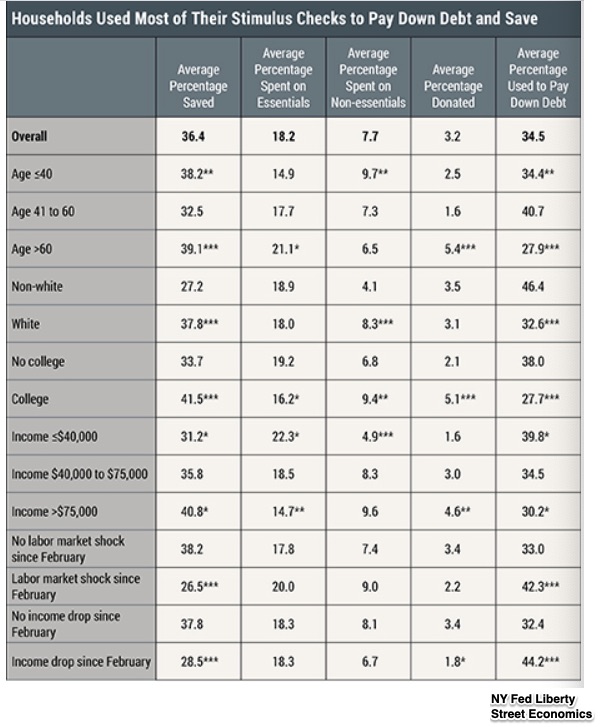 Now though, it really gets even more interesting.

During August, participants were asked how they would spend a second check. Assuming they got $1,500, spending goes down to 24 percent with much less on essentials. For saving and reducing debt, the total rose to 76 percent. The demographic differences remained the same.

Below, you can see that unemployment insurance questions revealed a much lower savings rate, and more spent on essentials and debt reduction. It makes sense that a household experiencing unemployment had more of a cash crunch.

This chart has the prediction for a larger stimulus check than the $600 that was in the legislation that passed at the end of December. However, the Biden $1.9 trillion proposal included a $1,400 check that, with the $600, totals $2,000.

Still though, you can see that relatively little is allocated to essentials.: 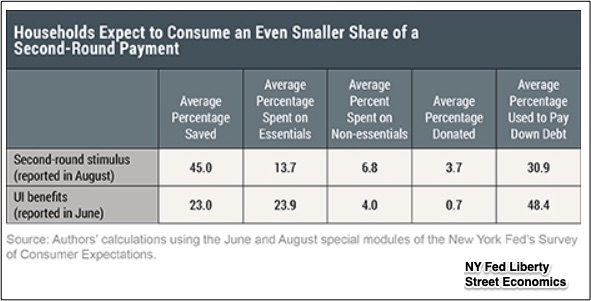 When economists consider how we spend any extra money, they say they are looking at our marginal propensity to consume (MPC). Because marginal can mean extra and propensity, what we tend to do, we are just asking what we tend to do when we have extra income. And, what do we do? We spend, we save, we reduce debt. The MPC is the spending part that buoys the GDP.

My sources and more: The new CARES Act survey and the spending predictions are from the NY Fed while this NBER working paper described the older questionnaires. As for a summary of the stimulus acts that were passed, this CNET article was the best. And finally, looking ahead to the Biden proposal, The Washington Post had it all. Also, please note that several of today’s sentences were in a past econlife post.

Our featured image is from CNET.

A Bit of Bitcoin Geography