Why People Do and Don’t Pay Taxes

In a lab experiment, Italians and Swedes had the same average rate of tax evasion. The difference though was how the evasion took place. Behaving like “fudgers,” Italians tended to be slightly dishonest somewhat frequently. Meanwhile displaying an “all or nothing” character, the Swedes were more likely than the Italians to pay entirely or not at all.

So yes, attitudes about paying taxes can depend on your national identity… but there is so much more.

Why We Do and Don’t Pay Our Taxes

This Pew Survey has some clues. When they tried to determine what made a good citizen, paying taxes was close to the top of the list of our civic responsibilities: 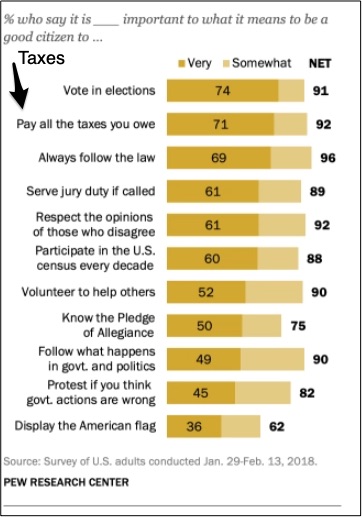 Somewhat similarly, in a recent paper, researchers said that state coercion is not the only reason we pay our taxes. Many of us respond to a moral imperative. We care about our civic duty and our ethical obligations. We pay our taxes because of a social consensus and moral alignment with our political leadership.

Happily, we have an example of the moral imperative in the U.K.  In an official letter from behavioral economists (called the Nudge Squad), tax procrastinators were told that, “The…majority of people in your local area pay their tax on time.” The letter worked. By emphasizing civic duty and consensus rather than a penalty, it maximized the revenue sent by tax scofflaws.

When you calculate how much of the tax bill the U.S. government receives, think 86 percent. The missing 14 percent comes from those who don’t file, those who pay late, and the people who underreport. To get non-compliance totals, the IRS divides the “tax paid voluntarily and timely” by the “total true tax.”

What it all comes down to though is redistribution. Taxes are always about transferring money from tax payers to the recipients of government spending.

My sources and more: There are so many different ways to look at tax attitudes. My starting point was an IRS report, a WSJ article, Pew, and this paper. From there, I took a look at the this research about Sweden and Italy.