When Money Makes Us Happy

In addition to income, gender, and racial inequality, there is a happiness gap.

In a recently published study, researchers looked at 44,198 participants’ answers to General Social Survey questions between 1972 and 2016. Their goal was to see if there was a connection between socioeconomic status (SES) and happiness for people over 30 years old. Selecting socioeconomic variables, they focused on income, education, and job prestige.

Simplifying we can say that it all came down to whether people said they were “very happy, pretty happy, or not too happy?” The answers got a 1, 2, or 3 with 3 the most happy.

Essentially though, there were three studies. Their first study combined everyone to see if the connection between happiness and SES changed over time. Then, based on race, Study #2 looked at the happiness gap between two groups of white adults and also at more and less affluent Black adults. To form conclusions, they divided survey answers by income, education, and job prestige. The year mattered too since they wanted to see if the happiness gap grew over time.

For the white and Black groups, the happiness gap increased but for different reasons. Between 1972 and 2016, the more affluent, more educated white adults trended toward stable happiness but those with less affluence reported a decline. Meanwhile, Black adults with no college education were the ones with more stable (lower) happiness while those with a college education said their happiness rose. For both groups, the income dividing line was $108,410.

You can see that happiness ascends with the income decile: 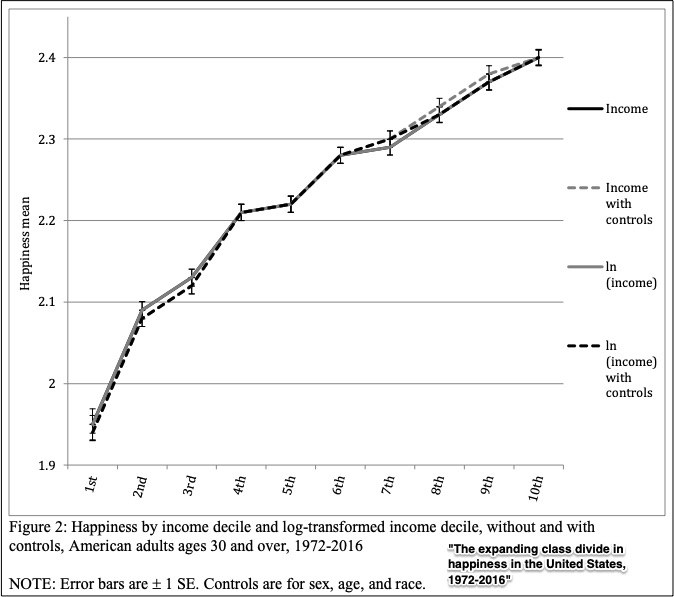 However, the more affluent white cohort trends to a more stable higher happiness level between 1972 and 2016 than those earning less: 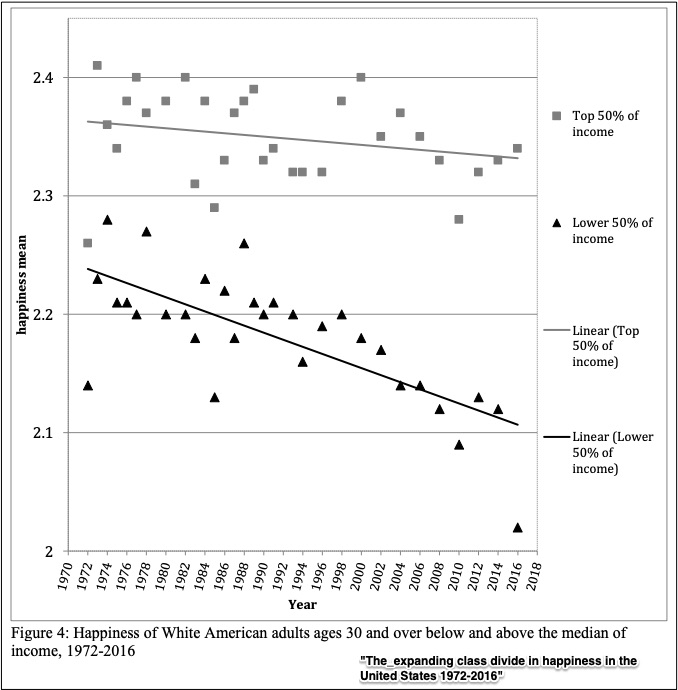 There has been some inconsistency among happiness/money studies. People self-report and you have to distinguish happiness at one moment from long term well being. Then, compounding the difficulties some say there is no connection between happiness and money and others cite an income threshold like $75,000 above which happiness does not increase. One new Robert Wood Johnson/NPR/Harvard study concluded that 90 percent of the top one percent was satisfied with their lives but as income dropped, so too did satisfaction.

So where are we? I guess happiness is yet another gap in our society that we should try to shrink. As with the others, it makes sense to pull everyone up rather than the top down.

My sources and more: Thanks to Marginal Revolution for alerting me to the newest research on happiness and affluence. That initially led me to The Washington Post, here and here and then to this paper.

What an Oil Boom and Bust Do to a Town