The Toilet That is Supposed to Boost Productivity

The sales pitch for a new toilet seat is the impact of its slope.

Where are we going? To labor productivity.

A recent survey reported that Londoners were spending slightly more than a whopping 28 minutes during a bathroom break. Concerned with worker productivity, some employers have expressed interest in personal time changes and toilet innovation. Their goal has been to limit time in the loo.

Through an employee lens, we could see the bathroom as a place for a private catch up on emails and texts. To prevent such long breaks, the workers at a Lanarkshire U.K. call center were contractually required to limit toilet visits to one percent of their work time For a four-hour shift, that would mean two minutes. People responded with horror. Their union told them not to sign the agreement.

This was the call center warning letter: 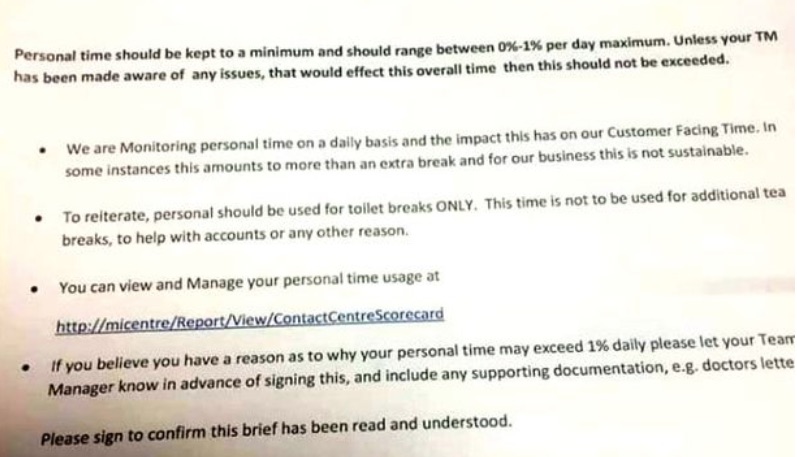 The slanted toilet (from Standard Toilet) has been called a more benign approach.

Making a longer stay impossibly uncomfortable, the toilet has a 13 degree pitch. Its developers claim that after five minutes your legs feel so much pain in this lowish level squat that you have to leave. As a plus, they add that the slope of the seat improves your posture and it has the BTA’s (British Toilet Association) stamp of approval. The device will cost $200-$650 (£150-£500). For now (and perhaps forever), it is still a prototype according to the BBC. 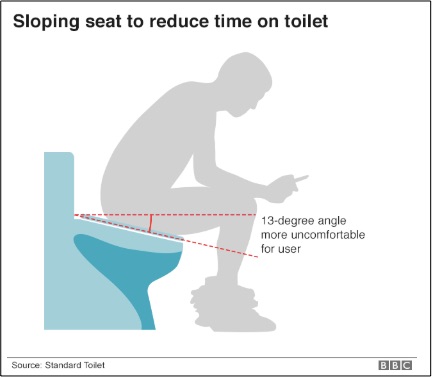 Here, let’s take a more serious look at labor productivity. You can see from the light brown section of the graph that it has been trending downward:

But it’s not just labor productivity. No one is sure why total U.S. factor productivity growth–for land, labor, and capital–has been slowing down.

Below, the BLS explains multifactor productivity:

And this is the slowdown: 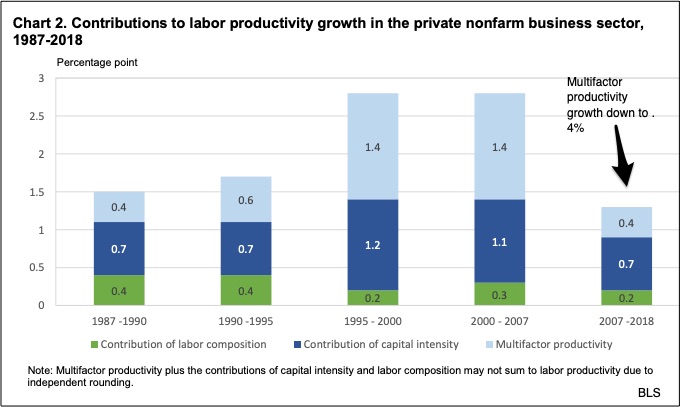 Multifactor productivity growth could be trending downward because we are not counting unpaid services like Wikipedia, some Apps, and Google Search. The CBO also suggests it could be slower growth, less demand for capital, lower rates of innovation, reduced human capital, or maybe too much regulation. They just don’t know for sure.

Princeton economist and former Fed Vice Chair Alan Blinder perfectly sums up our productivity woes at the end of a 2016 WSJ column: Asking whether we really have a technology slowdown or just a temporary hiatus, he says, “Tune in 20 years from now to find out. In the meantime, worry.”

Because productivity is all about getting more output per unit of input, our standard of living has been able to rise during the last century. Yes, innovation certainly helps but…the slanted toilet?

My sources and more: BusinessInsider directed me to Wired for the StandardToilet and more on toilet seat innovation. Meanwhile the BBC expressed people’s fury and humor and the Daily Record  described the worker response to the call center break policy. For the serious side on productivity, the Conversable Economist had a good summary from a recent Congressional Budget Office Report.

Our featured image is the prototype of the slanted toilet from Standard Toilet.

The Problem With Finding the Right Size

What Outer Space Adds to the GDP