The Grow Your Roots Café in Ontario, Canada recently had a regulatory run-in. As is obvious from the menu and most other places in the restaurant, the café is vegan. 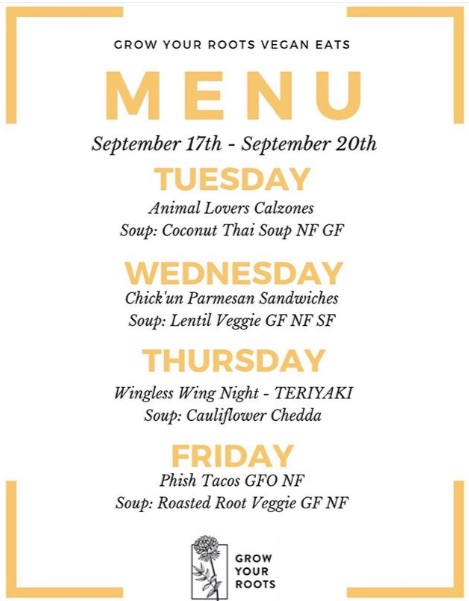 However, one diner complained after discovering that her cheddar was not real cheese.

The chef at Grow Your Roots (who is also the owner) explained that she serves vegan versions of familiar items. People can order a TLT made with tempeh bacon or tofu eggs Benedict. Her tuna mash is really chickpeas that taste like tuna when made with nori seaweed. However, the unhappy customer knew none of this. Believing her cheddar (that she totally consumed) should have been labeled “dairy free” she submitted a complaint to Canada’s CFIA.

At first the government agency asked the restaurant to change the menu. They wanted a Parmesan Sandwich to be “Parmesan-style.” Lacking eggs, the mayonnaise needed a new name. One by one, they checked off each item for an edit.

The restaurant refused. They knew most diners needed to associate vegan with normal food. They also believed that encouraging a vegan alternative was a healthy agenda for individuals and the environment. Adjectives and hyphenated endings only made the menu unappealing. And, after all, diners should have known they were in a vegan establishment.

At the end, the regulators changed their minds. Only the cheddar had to be called coconut cheddar cheese.

What happened at Grow Your Roots is happening everywhere. In the U.S., Dairy farmers have said that almond milk is not milk. Poultry producers are disturbed with Tofurkey. And we have the meat people wishing that a Beyond Burger could be called a “pea protein patty.”

As of April 2019, a slew of states have tried to respond. Last year, Missouri said meat could refer only to food from slaughtered animals. North and South Dakota, Arkansa, Kentucky, and Mississippi soon followed with similar legislation. The U.S. Department of Agriculture is still deciding.

In Europe, we could soon be ordering “veggie discs.” An EU committee recently recommended that vegan nomenclature should be different from “the real thing.”  Similarly, a 2017 European Court proclaimed that plant-based products could not be called milk or cheese or butter. (What about peanut butter?)

Tongue in cheek, the British newspaper the Guardian concluded that:

I wonder though if we are seeing the food version of Joseph Schumpeter’s creative destruction. Creative destruction is a painful process because industries disappear when the new replaces the old. And yet, it is the way that invention fuels capitalism.

It is why the real cheddar people are resisting the vegans.

My sources and more: Thanks to the Allusionist podcast on vegan names for making my four mile walk a listening pleasure. From there, The Guardian had the EU perspective.

Our featured image is from the Grow Your Roots website.

The Manufacturing Jobs That Are Disappearing