The Manufacturing Jobs That Are Disappearing

The Netflix film American Factory begins in 2008 with General Motors closing an S.U.V. plant near Dayton, Ohio. Quickly, the story jumps to 2015 and the happy arrival of a multinational Chinese auto glass making company. Using its Illinois location to make the glass, Fuyao Glass America resuscitated the abandoned G.M. Ohio plant to bend glass, shape it, and get it ready for U.S. auto manufacturers. The headlines said they would hire 1550 workers. From furnace technicians to forklift drivers, the local labor force expressed joy that at last manufacturing jobs were returning to their community.

Do take a look at the film’s trailer:

I don’t want to tell too much because the documentary is superb, worth a watch. But I can say that the film left me thinking about the stunning comparison between U.S. and Chinese workers, the decline of unions, and the impact of automation. Together it all added up to disappearing manufacturing jobs.

Throughout our history jobs have always become obsolete. During the 1970s we still had telephone switchboard operators. Describing her work in newly discovered tapes, one operator tells how she said seven or eight phrases over and over again, “Operator, how may I help you,” or “You have a collect call; will you accept the charges?” or “What number do you want?”

In this 1952 image, the operators are seated inches from each other: 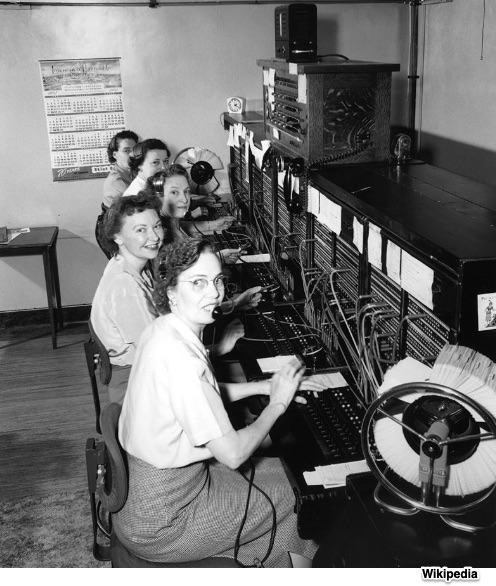 Similarly, pinsetters, icemen, and street lamp lighters have all but disappeared. In bowling alleys, from the beginning of the 20th century to the 1940s, a pingirl or a pinboy would have been stationed near the gutters waiting to pick up and reset the pins after they were knocked down. Until the 1940s, many of us needed an iceman to deliver the 25 to 100 pound chunks of ice that chilled our refrigerators. And, as in NYC until electrification, we had lamplighters who lit 200 to 300 gas streetlights an hour.

In a September news release, “Employment Projections–2018-2028,” the Bureau of Labor Statistics told us where it thought the job market was heading.

The largest number of new jobs were low paying positions that related to healthcare:

And the disappearing jobs? Manufacturing: 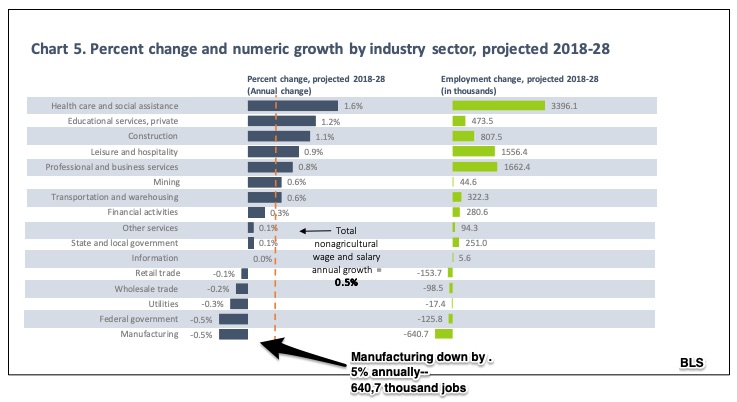 An economist might say we are looking at labor markets.

Shown on a circular flow model of the market system, labor markets are located in the lower loop. Below you can see that labor is a factor resource (with land and capital) that households provide to businesses in return for wages and salaries: 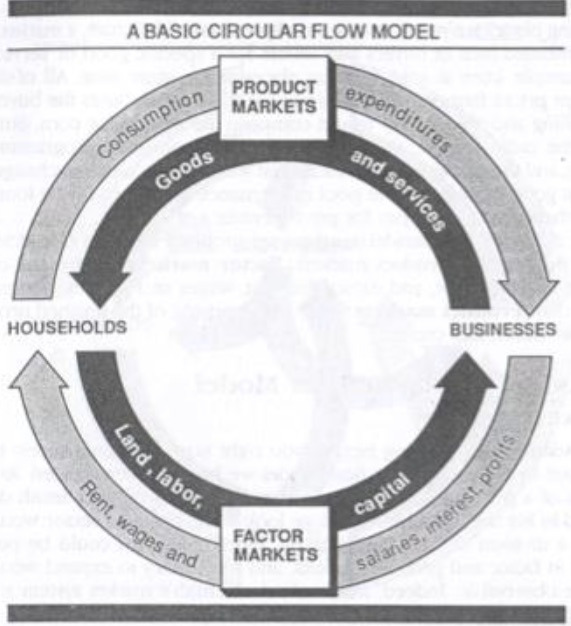 At this point, an economist could also point out that the demand for labor in labor markets is similar to other markets. As always, a market is a process through which supply and demand create price and quantity.

But they also send a message. The message from the U.S. manufacturing job market is that the supply of labor is more expensive and equipped with different skills than the demand side is looking for. In American Factory, we can see the human side of that change in demand.

My sources and more: Available through Netflix, American Factory  wonderfully tells American and Chinese worker stories as the bigger manufacturing jobs issues unfold. From there, I recommend the Dayton Daily News as a handy way to learn more about Fuyao. Then for the U.S. overview, Planet Money  and the Planet Money Indicator each looked at jobs in recent podcasts. And finally, for a quick look, this page-long BLS job market press release has the projections.

Please note that sections from today were previously published in a past econlife post and our featured image is from Pixabay.

A Different Way To Worry About Climate Change