Assume your government has $1 to spend on a social safety net. You need to decide who gets what.

One way is ROI–the Return On your Investment. Of course we can ask about return through non-dollar criteria. But what if we just look at what the government spends and what it gets back later?

These are some of the answers.

Researchers looked back at 50 years of safety net programs. Focusing on 133 initiatives, they assessed the impact of each extra dollar that was spent. The programs fell into four categories. Next to each category, I’ve included some examples:

From there, though, they also looked ahead. They determined if the program meant the person would have a future job. They considered the taxes the person would pay. They were concerned with the future contribution that person’s enhanced human capital would generate.

You can see why programs that directly benefited children had more “bang for the buck” than most adult programs. Better health and more education during childhood enable someone to flourish as an adult. By contrast, a 50-year old getting Social Security Disability will work less and have higher medical bills.

The following tough-to-read graph summarizes the whole study. So please just look at the dots. Since the x-axis represents age and the y-axis, the extra “bang-for-the-buck,” you can see the general pattern. The dots are highest on the left where the return is higher and age is lower: 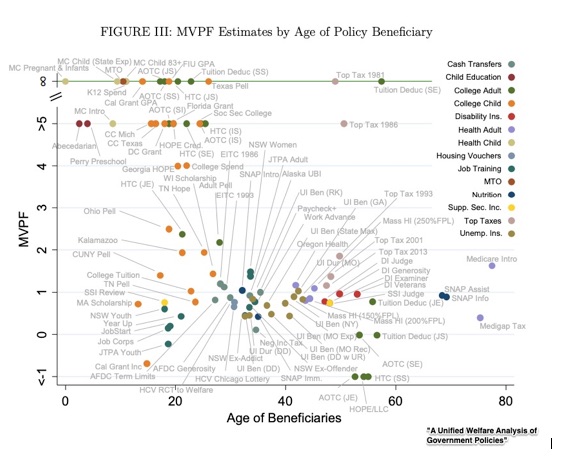 Researchers concluded that age matters. Programs that invest in the health and education of low income children have the greatest extra value.

For one dollar spent, the extra amount generated was as much as 75%:

We can look for example at when Medicaid started paying more to pregnant women and children. Initially the program cost, for each mother, an average of $3,473 to which they added reduced tax revenue from women who no longer worked. However, government saved $868 per mother because fewer women used federally funded clinics to give birth. And, years later, we get a $530 plus per person from those kids becoming healthier adults. Yes, government had extra college financial aid bills. But we wind up with employed adults that pay taxes and require lower transfer payments.

As a general pattern, one dollar spent on programs that target adults cost 60 cents above what was spent.  Adults who benefit from safety net programs tend to work less and use more medical care.

Below, you can see the programs that have a negative return: 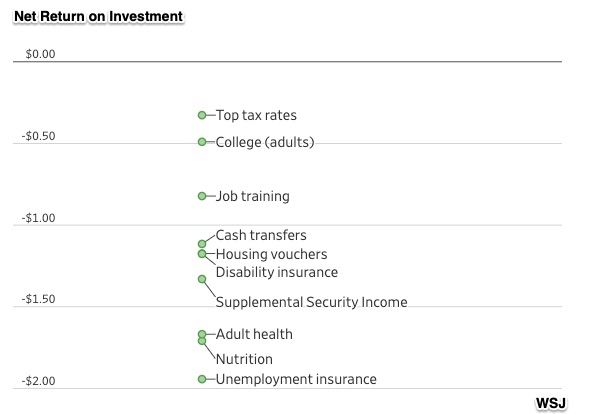 Most simply stated, the margin is where we get something extra. For safety net programs, we can compare the value of an extra dollar spent to the extra return we get from it.

However, when we compare cost and benefit, the tough part is quantifying benefit. For this study, researchers used Willingness to Pay (WTP) which was precisely what the phrase implies. It created a dollar amount that people would have paid for the services they received. On the other end, they also looked at the government cost in the short and long run. Then by dividing the benefit (the WTP) by the cost, they wind up with its MVPF (Marginal Value of Public Funds).

And, we can wind up with two questions. We can ask if dollars are the only metric to judge these programs. Also, thinking of the presidential debates, we can conclude that Medicare for All might not have as much value as programs that target low income children.

My sources and more: WSJ alerted me to the federal programs that generate the best results and linked to this paper. Then, to read more, you might compare all of this to the impact of penicillin in Italy after World War II.

How to Bond With a Rhino