WSJ says Turkey is their adversary. But the battle is much bigger.

During the past four years, Turkey has geometrically increased its tart cherry exports to the U.S. Climbing annually from 200,000 pounds in 2015, the 2018 total is 1.5 million pounds. This year, by the end of February, the number entering the U.S. had surpassed one half million.

The big problem is price. Because of the Turkish government’s support, the price per pound for Turkish tart cherries has been 89 cents. Far more, U.S. cherry processors have been receiving $4.60 (while the farmers, at $.30/pound or so, get much less). So the processors asked the U.S. International Trade Commission to rule that they’ve been harmed and deserve a 628.9% tariff.

But the industry has always had price problems. Tart cherries are particularly vulnerable to the weather. The industry is plagued by a big crop one year and a small one during the next. Dried cherries face competition from other commodities. They have no support from a big processor.

Responding, the industry has sought to control the market. They’ve gotten a small tariff on Turkish tart cherry juice and federal marketing orders that permit them to manipulate volume through marketing strategies. The federal government just said it would do a repeat $15 million tart cherry purchase for federal assistance programs. Based on the Agricultural Marketing Agreement Act of 1937, tart cherry farmers can sidestep antitrust regulation. They can accumulate a cherry reserve that is released when there is less supply and withheld when there is more.

You can see where the tart cherry crop goes: 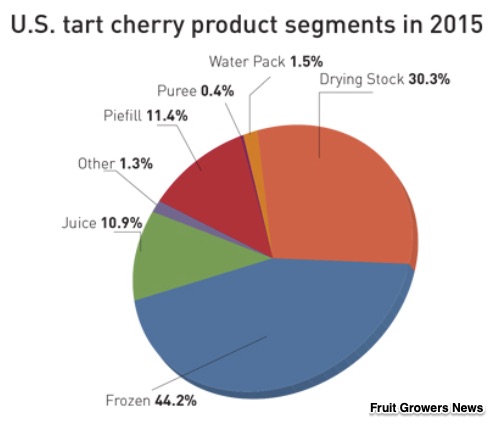 The big question is the role of government.

Tart cherry processors and growers have more to cope with than Turkey. We can ask if we want to perpetuate an industry that cannot survive the vagaries of the market. If the answer is yes, then a 600% tariff, a cherry reserve, and U.S. government subsidies are okay.

My sources and more: WSJ alerted me to the possibility of a tart cherry tariff. From there, the Detroit News gave more insight about tart cherry prices. But the fascinating part was this Fruit Growers News report and the USDA’s market controls.

This post was edited after publication. I thank tart cherry grower Kathy Morrison for correcting my incorrect pricing facts.

How To Make Kids Smarter