Salted Crack Caramel Ice Cream is a customer favorite at the Ample Hills Creamery in Brooklyn. Chock full of saltines that are coated with butter, sugar, and chocolate, it requires a lot of labor and expensive ingredients. Those of us that order a more profitable flavor like vanilla (my favorite) help ice cream stores make their money. 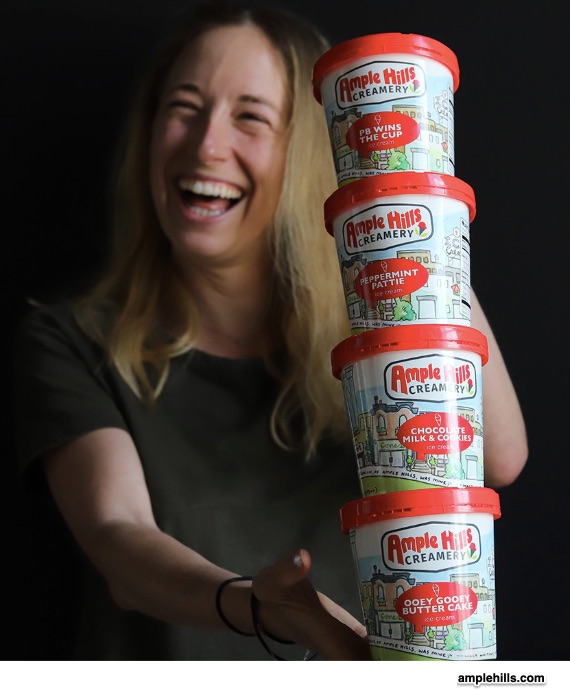 While Ample Hills is in the newest ultra-premium segment of the ice cream market, it still displays six economic basics.

The FDA (Food and Drug Administration)  tells us what can be called ice cream. While ice cream is just milk, sugar, and air, its production and ingredients are rather precisely defined. To be ice cream, a pasteurized mix of specified ingredients is frozen while being stirred. Their dairy milk fat content can be no less than 10% and their weight per gallon, at least 4.5 pounds.

If you’re making ice cream and want to save some money, use more air. Air is cheap while butterfat is not. Called overrun, the quantity of air in your ice cream inversely relates to its butterfat. You could have a mix of 100% overrun which means 50/50 with butterfat. But butterfat gives ice cream its mouthfeel. It provides richness and density. However, when butterfat content exceeds 20%, your tongue could start to feel funny.

Looking back, we can divide ice cream’s competitive market structure into before Häagen Dazs and after Häagen Dazs. Designed to conjure up images of artisanal Europe, the made-up name came from a married couple living in the Bronx, NY whose first store opened in Brooklyn in 1976. With more butterfat and a higher price ( 75 cents–the equivalent of approximately $6.40 today), we wound up with one of the first super-premium ice creams.

Soon after there was Frusen Glädjé, Ben & Jerry’s, and a slew of copycat firms. From there, the rest of the story is history with the supermarket ice cream freezer giving us a range of butterfat options.

4. Thinking at the Margin.

But all we really were doing is thinking at the margin. Economists like to say that our decisions are usually about how much extra we want. Is it extra sleep beyond the alarm or how much to exceed the speed limit? With ice cream, we are talking about butterfat content and five ice cream categories.

So, when we decide which kind of ice cream to buy, we are really thinking at the (butterfat) margin.

In 1977, Ben and Jerry were one of the first to create their own quirky flavors in a converted Vermont garage. Their Chocolate Heath Bar Crunch required (they say) a 6-foot ladder for dropping Heath Bars in order to achieve the ideal size chunk. Dastardly Mash had a chocolate base and a combination of almonds, pecans, raisins, and chocolate chips.

Similarly, businesses like Ample Hills create their own flavors. Competing in a monopolistically competitive market that is composed of many other small and similar businesses, they need to distinguish themselves. Whether using ice cream names, stories, or ingredients, they let us know how they are different.

You can see that at $62.91, the U.S. annual average would make ultra-premium ice cream a less typical purchase: 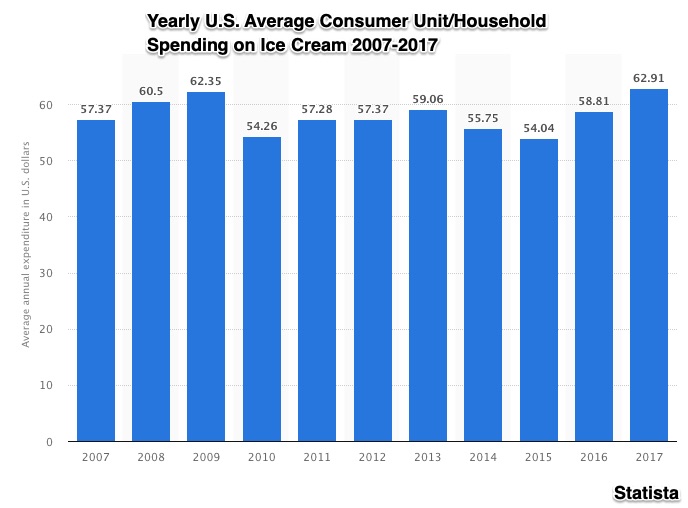 A monopolistically competitive market structure creates specific incentives for ultra-premium ice cream makers. Or as WSJ says, they need “cold, calculated planning…” In a typical pint, the cost per ingredient can range from vanilla at 20 cents to $3 for a “tiramisu, liqueur and marscapone cheese extravaganza.” Another producer made seven flavors because the typical supermarket freezer shelf is seven pints wide. And we have Ample Hills figuring out the optimal number of scoopers for line speed. (It’s eight.)

So yes, behind the sweet side of the business, we have ice cream economics that are all about a profitable combination of land, labor, and capital.

My sources and more: Thanks to eater.com for an ice cream “long read” and WSJ for telling the Ample Hills story.

Please note that two sentences were slightly edited after publication.

The Surprising "Green" Side of the SUV