The Surprising “Green” Side of the SUV

When National Geographic discussed the environmental impact of a car, it looked at the beginning and end of its life. The bad news is that making an auto’s plastic, steel, paint, rubber, and glass requires massive amounts of energy. The good news? 75% of today’s average car can be recycled.

Then though they remind us that our vehicles are responsible for close to one-third of all U.S. air pollution. Asked which kind of car is one of the biggest culprits, you might say it’s the SUV.

There are many more cars than SUVs:

But still we are concerned because SUVs are such big gas guzzlers. Two more variables though are relevant. We should look at the occupancy rates of the vehicles and the fuel it takes to carry those people.

You can see below that a gallon of gasoline takes a typical SUV just about seven fewer miles than an average car. But that same SUV typically carries more people. Counting  the people in 100 SUVs, the total would be 183. For 100 cars, it’s 154.

Adjusting for the increase in the SUVs weight from the extra passengers, we wind up with fuel consumption being much closer for the two types of vehicles:

Our Bottom Line: SUV Emissions at the Margin

Economists like to say that the tradeoffs in our lives aways occur at the margin where we have to decide how much extra to do. For the connection between transportation and GHG emissions, we are dealing with countless decisions at the margin. The result? Transportation creates more emissions than five other major economic groups: 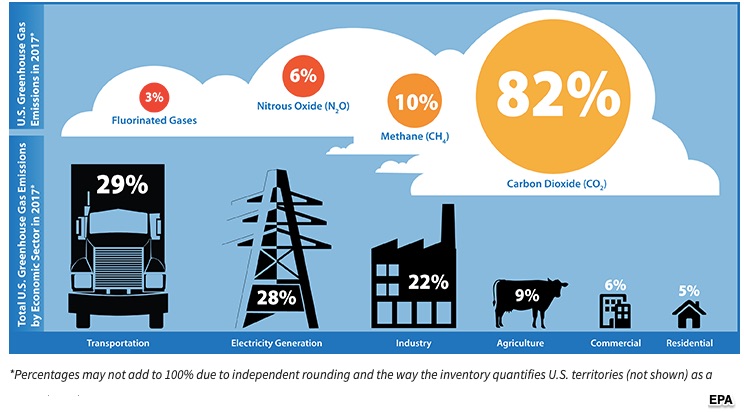 Then, looking at transportation more closely, we find that SUVs and other light duty vehicles are responsible for 60% of all transport created GHG emissions in the U.S.: 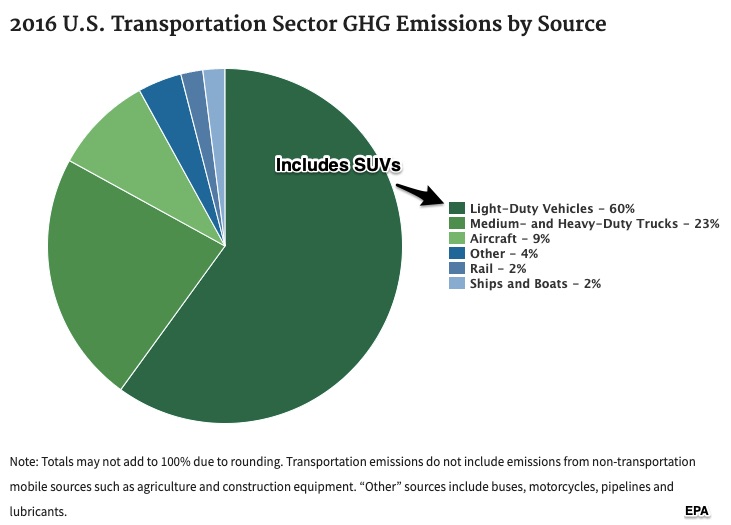 So, if you want to lessen the SUV emissions impact at the margin, do listen to the WSJ numbers lady who says when you fill up with fuel, be sure to fill up with passengers.

My sources and more: The numbers woman at WSJ again provided surprising insight and a link to the M. Slevak SUV report. Next, to read about the big picture, National Geographic had a few paragraphs and the EPA had the graphs.