The Light Side of South Africa’s Electricity Problems

When the host of The Daily Show, Trevor Noah, visited his 91-year old Grandma in South Africa, he was told that she never watched his program. Why? Because “we had no electricity.” So he promises to buy her a generator.

This was their chat. The electricity part starts at 10:00:

Where are we going? To Grandma Noah’s electricity problem.

Quartz tells us that while more than 600 million people in sub-Saharan Africa have no access to an electrical grid or less traditional forms of light, people in urban areas (like Trevor Noah’s Grandma) have no dependable source. And like his Grandma, those individuals and businesses need generators.

Yes, high for sub-Saharan Africa, 86% of the South African population has grid access to power. One study though reports that .9 times a month, it goes out because of overload, poor maintenance, aging equipment, vandalism, coal shortages. The list is long.

And now, Eskom (the South African national power company) is increasingly “load-shedding” by selectively deciding who will go dark. One online response is advice on how to drive without traffic lights. (As you would expect, go slowly and treat every inoperative light as a stop sign.)

Shown by the orange bar, the cost of the diesel backup far exceeds the grid price:

Below, you can get an idea of the extent of outages in sub-Saharan Africa: 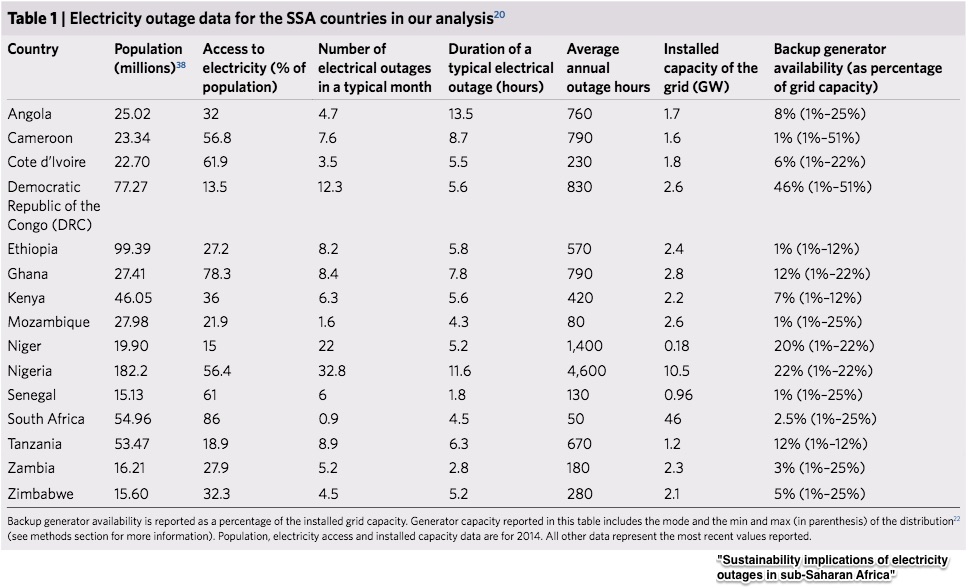 Electrical outages are a drain on economic growth. They diminish what businesses can produce and what consumers can purchase. They waste money on backup power that might be spent elsewhere. In addition, we have the non-quantifiable side that relates to everything from less safety at night to slower driving.

And, we have Grandma Noah missing her grandson.

My sources and more: Thanks to qz.com for alerting me to the Trevor Noah story and then, the current picture on African electricity. Next, to read onward, this paper has the academic perspective while the South African power company described load-shedding. But it was most enlightening to see this press look at its frequency and its impact on driving. Finally, I recommend Trevor Noah’s book Born a Crime. It was an excellent listen (read by Trevor Noah) on Audible.

Our featured image is from Quartz.

What We Might Not Know About Philadelphia's Soda Tax