What We Might Not Know About Philadelphia’s Soda Tax

The Philadelphia tax on sugary drinks and diet soda kicked in on January 1, 2017. As a 1.5 cents an ounce tax on distributors, it did not hit consumers directly. But a recent study indicates that it was passed along. Through the list price on the shelf, consumers paid close to 20% more for regular soda, diet soda, and juice drinks. That adds up to $1 extra for a 2-liter bottle and $2.16 for a 12-ounce, 12-pack.

But did it make a difference?

The Impact of the Tax

In a new “before and after” study, economists looked at the Philadelphia tax. The study covered 140 retail stores and more than 1200 sweetened beverages.

In their report, researchers concluded that while the tax was passed through to consumers, the amount varied. It was less in stores located in border communities and more, especially for soda, in high-poverty neighborhoods, independent stores, and for single servings. Also, taxed drinks were relatively less available. Instead, there were more bottled waters on the shelves. Consequently, it was more difficult to obtain a sugary beverage.

To all of this we can add that even without a sugary drink tax, we are drinking more water:

Our Bottom Line: Efficiency or Equality?

The Tax Foundation had an interesting approach that I wanted to share. Their take was the tension between efficiency and equality. On the efficiency side, they cited the health benefits created by the sugary beverage taxes. Shown by decreased sales of sugary beverages and increased availability of non-taxed drinks in Philadelphia, it is possible that obesity trends could be slowed.

However, on the equality side, we have a regressive tax. Defined as a levy that takes a higher percent of income from those who earn less, a sales tax is regressive since we all pay the same amount.

You can see below that Tax Foundation data indicate those earning below $100,000 have the highest percent spent on sugary beverages. 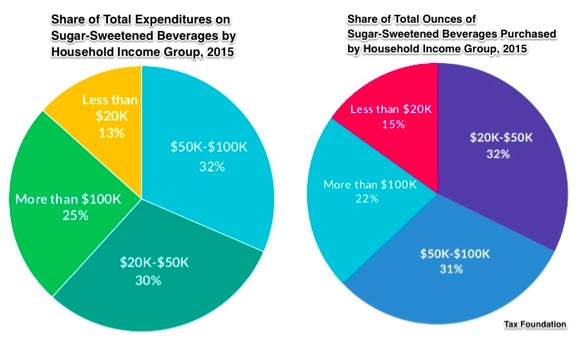 So, when you ponder the impact of a sugar sweetened beverage tax on price and availability, do add efficiency and equality to the mix.

My sources and more: For the latest results on the soda tax, this paper was a good source as was this summary. Meanwhile, the Tax Foundation had the tax rate analysis.

The Light Side of South Africa's Electricity Problems