Why the Republicans and Democrats Are Like Coke and Pepsi

Asked to name two firms that dominate an industry, we could start with Coke and Pepsi.  Next, we could add FedEx and UPS, or Boeing and Airbus, or Visa and MasterCard. There is one pair though that we should have included but did not.

The Republicans and the Democrats.

Harvard’s Michael Porter is famous for using “five forces” to judge businesses’ competitive power. Now he tells us that they also can apply to politics. Just like the firm, we need to assess the power of buyers and suppliers. We should see if new entrants and substitute products are a threat. And lastly, we have to consider the rivalry among competitors.

In politics, Dr. Porter sees the two major parties competing during elections and when they govern. Among their five “buyer” groups are the primary voters, the average voters, and the non-voters. However, the largest blocs of voters aren’t the most important. Instead, it’s the primary voters and then the donors and the special interests.

Similarly, on the supply side, the major participants have considerable money and power. They include TV, cable, newspapers, social media, and the people who directly contact voters. At the federal level, spending on “supply” for the 2016 two-year election cycle was close to $16 billion. It generated approximately 19,000 jobs for lobbyists, campaign workers, consultants, and other staffers. There were close to 1,000 organizations with consulting contracts.

Meanwhile, there is little competition from upstart entrants and substitutes. Since the Republicans in 1854, we’ve had no new major political party. The Progressives (1912) and the Reform Party (1992) came and went. The reason? Size, money, connections with suppliers, and a recognizable “brand” are formidable entry barriers.

As an industry, politics is big business. But unlike other successful big businesses, they’ve preserved their power by catering to the extremes rather than the vast center: 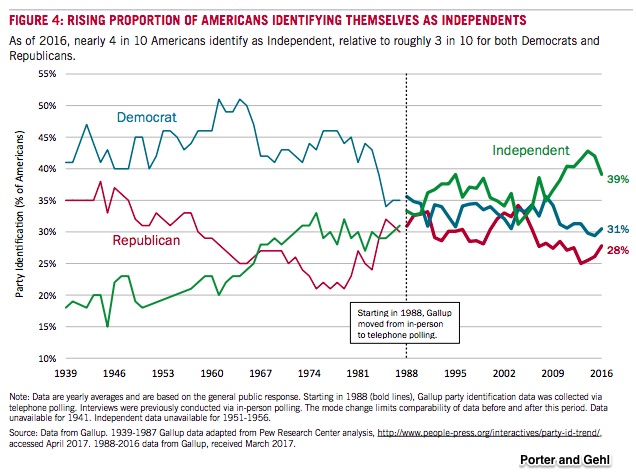 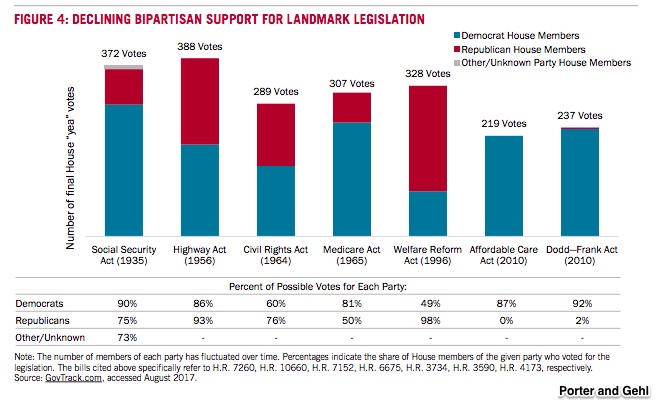 An economist would blame it all on duopoly. As a market structure whose two dominant participants have considerable power, duopoly is responsible for how Coke and Pepsi and the Democrats and Republicans behave.

You can see below that duopoly is close to monopoly on a competitive market structure continuum. Located to the far right, duopoly is on the less competitive end of the spectrum where the firm (or the party) takes power away from the market:

My sources and more: Thanks to Freakonomics for a timely alert to the 2017 Michael Porter and Katherine Gehl paper.

The Unintended Impact of Amazon's HQ2

Do We Care About Calorie Labels?