Why Aren’t We Worried About the Budget Deficit?

During the 2016 presidential election, the candidates paid little attention to the budget deficit. When the Republican hopefuls debated, they pretty much ignored it: 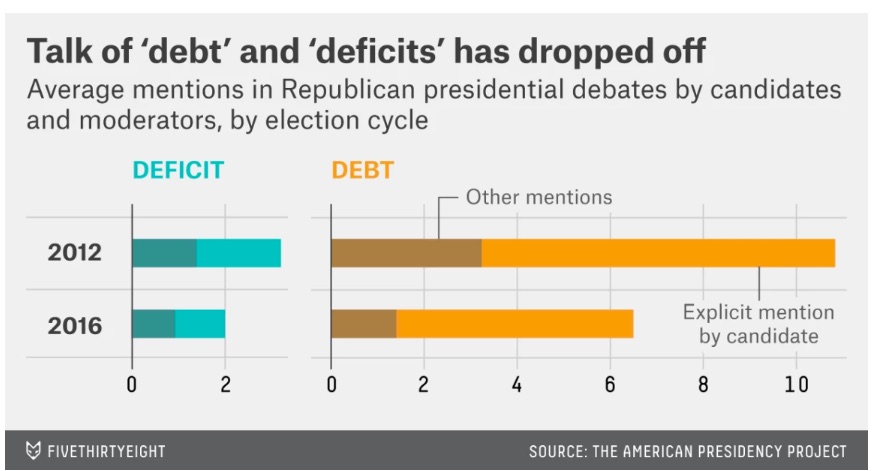 Similarly, the Congress is referring to the deficit less frequently. At what might have been a peak during 2011, the mentions of the deficit by our lawmakers were at 8,101. Then, by 2015, the number plunged to 1,543. Although I could not find any update after that, I suspect the number has remained low.

The following graph confirms that we care less about reducing the budget deficit: 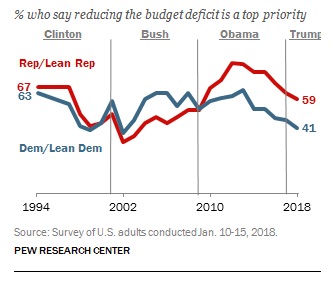 And yet, up 17%, the most recent number on the gap between federal spending and federal revenue–the deficit– was the highest since 2012:

I do wonder if growing deficits are really about delayed gratification. In the classic marshmallow study, 4-year olds were told if they avoided eating one treat now, they would get two 15 (or so) minutes later. For the deficit, we know that if we decrease spending or increase taxes, we will have more money later to support Social Security and Medicare. But whether it’s marshmallows or the budget deficit, short term pain for long term gain can be tough.

Then, to top it off, no one is really sure what our borrowing limit should be as our deficits climb. In addition, worrying about the huge number of Baby Boomers depleting the Social Security and Medicare Trust funds in 10 to 15 years might be too distant a concern. And finally, is there a politician who would suggest enduring some austerity now to ensure the future health of government finance?

So yes, economists will tell us that two tradeoffs could explain why the deficit is growing. We won’t exchange short term pain for probable long term gain. And our politicians would not trade fewer votes for better government finance.

My sources and more: Recent articles on the deficit were sparse. However, in 2016 fivethirtyeight had the perfect data and analysis and Pew surveys for government priorities continue to provide insight.

Our featured image from Wikipedia is the U.S. Treasury building and the statue of Albert Gallatin.

Why We Share Homes, Cars, and Clothing With Strangers

What Our Cars Say About Us