Why U.S. Winemakers Can’t Fight the Trade War That the President Uncorked

The headlines said that the Chinese were drinking more red wine than any other country on this planet. Further suggesting China’s growing presence in the wine world, the Financial Times said that they were the world’s fifth largest wine producer. The other four were Italy, France, the U.S. and Spain.

Where are we going? To wine tariffs.

It makes sense that as China’s middle class expands, so too will its wine consumption. And that means imported wine.

According to some China watchers, they are not producing as much wine as they report because local officials inflate the figures. In addition, consumers are attracted to imported wines because of their dependable quality and aspirational image. As a result, it is entirely feasible that close to half of China’s appetite for wine is being fed by imports.

Our goal here though, is to see where the U.S. fits in. And like the production data, I found that the Chinese imported wine numbers varied. However the consistencies all confirmed that the U.S. occupies a small slot in China’s wine import totals: 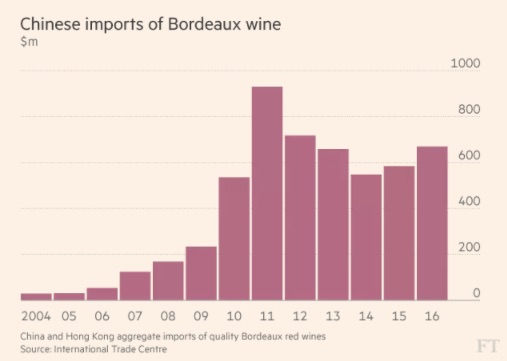 Similarly, when we flip our perspective to U.S. wine exports, we still see a small slot for China. By volume, China was the #4 destination for U.S. wines while the EU, Canada and Japan were at the top. We could elevate China’s numbers since Hong Kong re-exports some of its pricier U.S. wine to China. (As Hong Kong’s Financial Secretary pointed out, the 7.3 million or so people who live there are not drinking all of the 80 million bottles of wine that they imported in 2017.)  But still, the U.S. sends six times more wine to Canada.

And finally, as always, we should remember that the numbers are about real people. With China saying it will levy a 15% retaliatory tariff on U.S. wine imports, the California vineyards that depend on China will be hit hard. One Napa Valley wine maker says a combination of the new and existing levies will be “brutal.” The reason? Australia and Chile have free trade agreements with China.

As economists, we can look at supply and demand when we consider the impact of a tariff.

The tariffs surely gave China’s domestic vintners and other exporters a signal. Because of less competition from the U.S., they can occupy more of the market.

On the demand side, U.S. wine tariffs will decrease the quantity of imports from the U.S. that Chinese consumers are willing and able to buy. The reason is the law of demand. When price goes up, quantity demanded goes down.

You can see below that the quantity demanded drops when the horizontal line changes from blue to green because of the tariff:

Where are we?  Returning to our title, we could say that President Trump left California’s wine growers with no ammunition to fight the trade war that he has uncorked.

So very charmingly, below, Nobel laureate Milton Friedman explains that tariffs can appear attractive because the job numbers they boost are visible while the costs to consumers and exporters are invisible. Do watch the full six minutes. Dr. Friedman presents a wonderful banana example at the end.

My sources and more: A lead article in the NY Times alerted me to the specific impact of the Trump China tariffs while FT  gave the bigger picture and this website had some numbers. However, I especially enjoyed and recommend the Grape Wall of China blog.

Please note that my description (above) of the Friedman video was previously published in a past econlife.