The Nantucket Board of Selectmen voted unanimously to change its name. Calling itself the Select Board, the (soon-to-be former) Selectmen proposed the switch to avoid sounding like they were all male. They also worried about dissuading young girls from entering politics.

So yes, many of us believe that gender specific job titles can make a difference.

The Battle of Wakefield

Nantucket was not alone. Thirty other Massachusetts municipalities have also changed the name of their ruling body. And for some, it was more contentious than in Nantucket.

In Wakefield, several of the selectmen opposed the change (they were men). Looking back, one said their name was a tradition dating back to 1625. Someone else pointed out that most of us are comfortable with female defensemen on hockey teams, and with policemen and firemen. One female politician (insightfully) commented, “If the traditional term had been ‘alderwoman,’ would I be sitting here right now next to Alderwoman Joe Smith?”

From France to the U.S. Marine Corps

Worried that changes would deal their language a “mortal blow,” the Académie française is resisting a gender-neutral transition. Four years ago they said no to feminizing job titles. They wanted to continue traditions like calling the members of a board directeurs even if only one were male and directrices if all were female. Explained much more expansively, they said gender-neutral words or recognizing gender make a description too complex.

What we are called makes a difference. When children are asked to draw people doing a job, they typically respond to a male designation in the title and just draw men. Somewhat similarly,  people hesitated when they read the second sentence that follows but not the first one:

“The foreman reassured himself he had made the right decision.”

“The foreman reassured herself she had made the right decision.”

You can see as did Nantucket’s Selectmen that language creates what behavioral economists call an expectations bias. We should further consider what we would like those expectations to be. 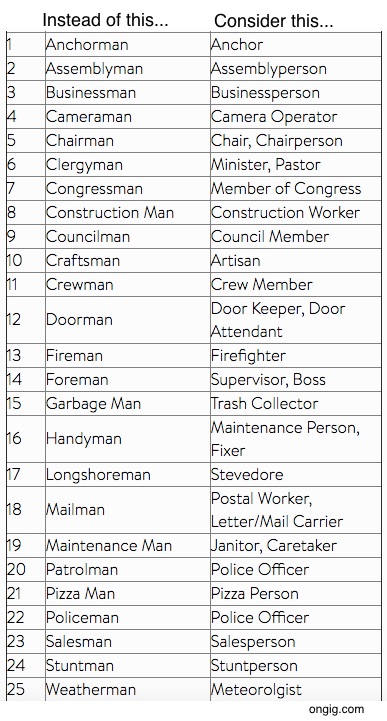 Why U.S. Winemakers Can't Fight the Trade War That the President Uncorked