What Santa Would Add to the GDP

We can figure out Santa’s annual income because he isn’t the only one who checks everything twice, wraps toys, and drives a sleigh. Since accounting clerks, professional shoppers and pilots do (sort of ) what Santa does, we can look at what they earn. Then, by estimating Santa’s hours, we can determine his (hypothetical) annual income.

We also can decide if unpaid work like Santa’s should enter our GDP calculations.

I guess we could say that Santa produces a service that the GDP could include. And, if we use the salary that the people at insure.com calculate annually, we could estimate that Santa might have added $149,434.33 to the GDP. Yes, their “parallel” occupations are not entirely comparable. But still, we do wind up with a ballpark figure: 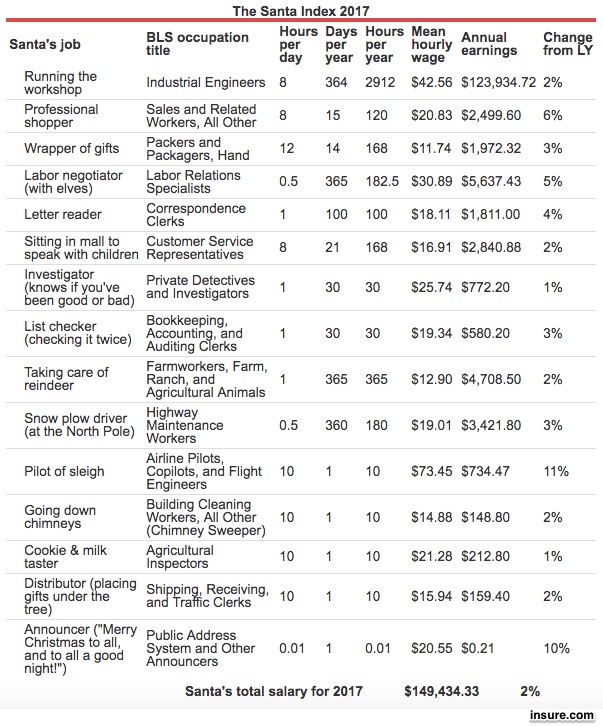 We also can recognize that, like Santa, we do a lot of work that is not recorded by the GDP.

Defining what we now call the GDP, economist Simon Kuznets created the concept of national income during the 1930s. His goal? A metric on which to base a yearly comparison of what we produce. His conclusion? Include only goods and services that could be legally purchased.

Less quantifiable, Santa and all unpaid work done in the home were excluded from the Kuznets formula. By eliminating unquantifiable variables, Simon Kuznets sidestepped considerable debate about the value of the goods and services in the GDP.

Now though, we are starting to include what he left out. In the EU, newly added drug spending, prostitution, and research funding have elevated the totals. Eurostat “guesses” indicate that these tweaked GDPs rose by 4% to 5% in Finland and Sweden, and 2% to 3% in Belgium, Denmark, Germany and France.

But, we are still not including Santa. (Maybe though Santa’s toys are included as an inventory change in the investment component?)

My sources and more: For an excellent analysis of the GDP’s shortcomings, I recommend this Economist article. Much less dry, the Guardian discussed the challenge of calculating the value of the trade in sex and drugs.

Please note that the spirit and some of the text of this post resemble a similar econlife from several years ago.

Why We Need to Pay Attention to Wobbly Plates