Looking at the Invisible Work That Women Do

October 24, 1975 was Women’s Day Off in Iceland. On that Friday, the women in Iceland refused to cook, care for the children, make the beds. Telephone service disappeared, newspapers and theaters closed, and schools, banks, factories, and airlines were down to a minimum. At the same time, sausage sales soared (an easy meal for the men to make) until the stores ran out. Instead of Women’s Day Off, some men called it “The Long Friday.”

Really though, the rally was about women’s invisible work, the gender gap, and foregone pay.

From cooking and cleaning to child and elder care, the list of unpaid labor is long. It includes all unpaid household maintenance tasks.

The problem though is the division of labor.

Each day, Swedish men and women have a 49.2 minute difference in the unpaid work they do. Not much more, Denmark reported a 56.7 minute gap and Norway, 58.8.  But it was the Japanese and Korean numbers that really flummoxed me. Daily, typical Japanese and Korean women do somewhere close to 220 minutes of unpaid work whereas the average man in their household does close to 40 minutes (or so).

Below, you can see the unpaid labor gender gap in 30 countries: 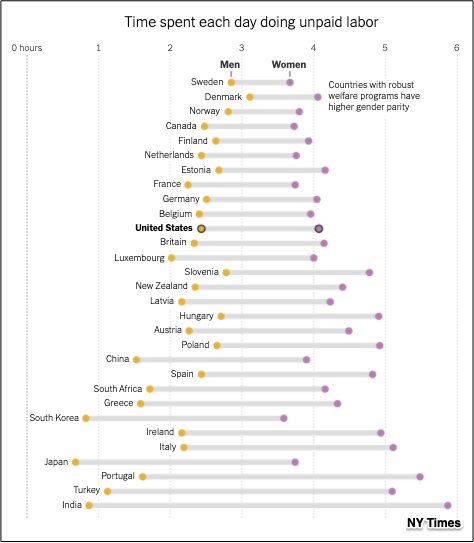 The OECD estimated the value of non-care housework through its replacement and opportunity cost. By non-care work, they are referring to tasks like cleaning, gardening, doing the laundry. As you might expect, the replacement approach based the numbers on what comparable market-based jobs paid people. Somewhat different, with opportunity cost, we are considering alternatives that were sacrificed. Because the numbers are for an average hourly net wage, they reflect what was foregone by doing housework. 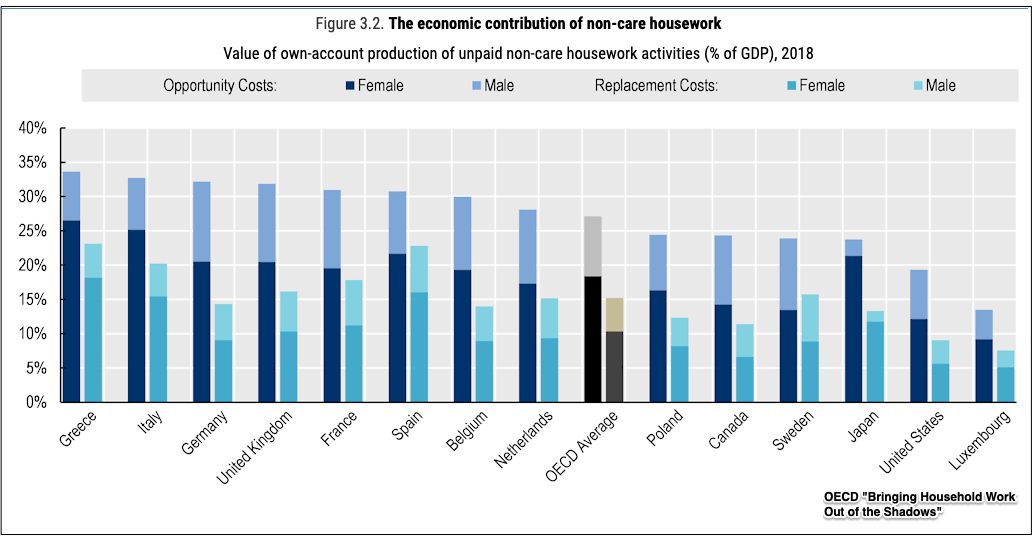 When Nobel Laureate Simon Kuznets first created the GDP concept during the 1930s, he decided that only market based paid work could be included. Since there was no market metric for work done at home, it was not counted. Remembering that we “treasure what we measure,” we wound up undervaluing child care, elder care, grocery shopping–all you do to run a household. In The Price of Everything, journalist Eduardo Porter suggests that when more women went to work outside the home, their labor became more valuable because home work acquired an opportunity cost. Defined as the sacrificed alternative, the opportunity cost had a dollar value.

My sources and more:  I found the unpaid work update at the NY Times and the OECD. Then, moving beyond the statistics, the BBC and the NY Times told the Iceland story. And finally,  The Price of Everything and Invisible Women: Data Bias in a World Built By Men had the ideas. (Please note that today I’ve excerpted some parts of past econlife posts.)

The ABCs of Russia's Debt Downgrade

The Mystery of the Shrinking Pretzel Packages