When a journalist spent his bitcoin on ice cream and pizza, the cost was many dollars and a lot of effort. For a $5 ice cream sandwich, he spent $17.50 while his $10 Domino’s pizza cost $76.16 and a four hour wait.

His transaction fees alone were more than $18:

Meanwhile, a vendor who accepted bitcoin as payment said he planned to hold on to his bitcoin rather than using it for any business expenses.

The court system had a bitcoin opinion last year. In a money laundering case, a judge said a defendant was not guilty of that crime. Her reason? If bitcoin is not money it cannot be laundered.

Sounding like an economist, the judge referred to the characteristics of money in her decision. She said that you could spend bitcoin but most venders would not accept it for payment because its value wildly fluctuates. That volatility–an average of 3% a day since 2012–also means it cannot be a yardstick of value or a viable store of value. So, for the three basics that make money, money, bitcoin flunks the test.

Below you can see why it gets an “F” for being a stable store of value:

So what is bitcoin?

Using sacrifice as the definition of cost, spending bitcoin is expensive. Finding people who accept it and paying them their transaction fees ups the “price.”

But bitcoin’s highest cost is unpredictability, especially when we compare it to other currencies. 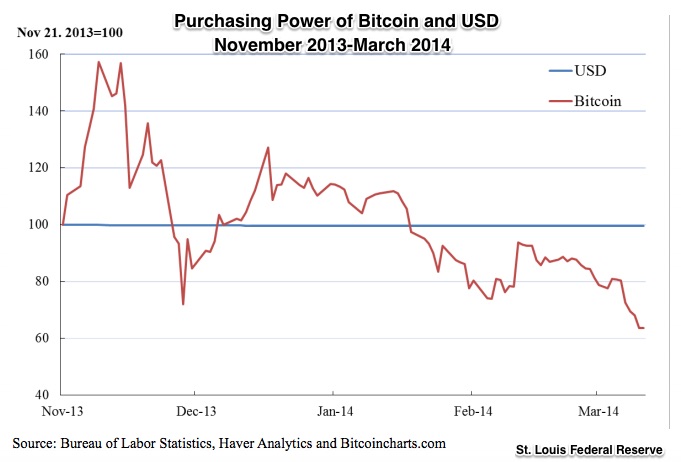 However, for 24 years (and after), the yen, the euro and the dollar have been relatively stable: 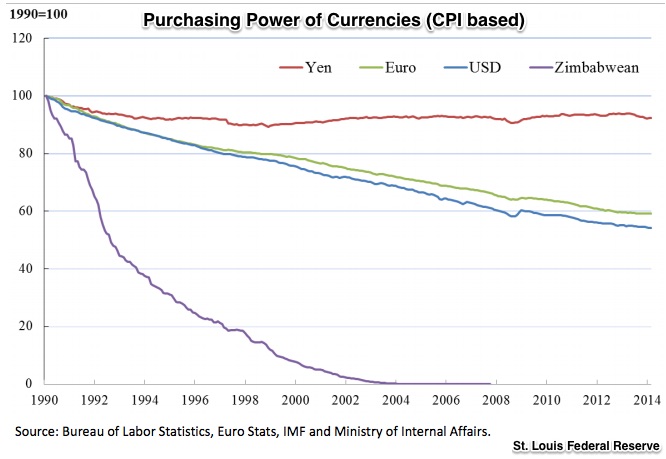 So yes, for reasons that range from the characteristics of money to cost, we can say that bitcoin is not money.

My sources and more: When I became increasingly frustrated that bitcoin was called a cryptocurrency, I found that a WSJ journalist had the same issues. To start though, you may want to read this bitcoin primer from a St. Louis Fed blogger. It is brief and clear and ideally complements this Washington Post article. Then finally and fascinatingly, MarketWatch details the regulatory status of bitcoin around the world.

After completing this post, I read this Quartz article on Nigeria’s use of bitcoin. As an offset, it displays the potential role of bitcoin in a developing nation with a less stable currency.

What Santa Would Add to the GDP

The Downside of Interrupting Women