What We Can Learn From a Tree

During the summer in 2019, researchers measured the temperature along two streets that are a kilometer apart near Sydney, Australia. On five days, one had extreme heat that exceeded 100 degrees F. (40 degrees C.) while the other reported similar temperatures on 13 days. Comparing one street’s 10 percent coverage to the other’s 30 percent, scientists concluded that the trees made the difference. Even after the sun sets, the heat absorbed by treeless ground surfaces makes the area hotter.

Scientists that map trees have found that the affluent have more trees. In Chestnut Hill, a community near Philadelphia with a median income of approximately $133,000, the tree coverage is 60 percent. However, at nearby Nicetown-Tioga, where the residents have considerably less wealth, they also have many fewer trees. At a median income of $37,000, their trees cover just six percent of the area.

The numbers suggest that there is a connection between trees and wealth:

The conservation group called American Forests has quantified tree inequality with a tree equity score.  Perhaps believing that “we treasure what we measure,” they have created a formula that combines tree coverage with variables that include income, employment, and race. Their goal is to use the tree equity score to indicate where it is especially necessary to close a tree canopy gap.

These are the variables. A score of 100 means you have tree equity. If it’s less, then it’s time to do some planting: 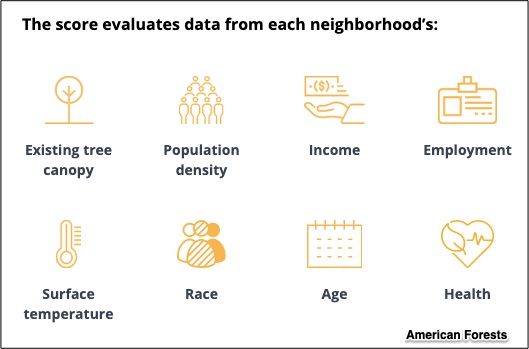 At the American Forests website, Washington D.C. and San Francisco have blocks with scores that tend to be in the 90s but also neighborhoods that got 70s. By contrast Phoenix Arizona has blocks in the 80s but scores also dip down to 55.

Defined as a benefit that ripples far beyond the individuals that create it, positive externalities come from trees. When trees cool, prevent storm water runoff, and sequester carbon, they create those positive externalities for millions of people. In an infographic, American Forests summarized what trees can do for us. Their message is clear and accurate although I always worry about projections with such precise numbers: 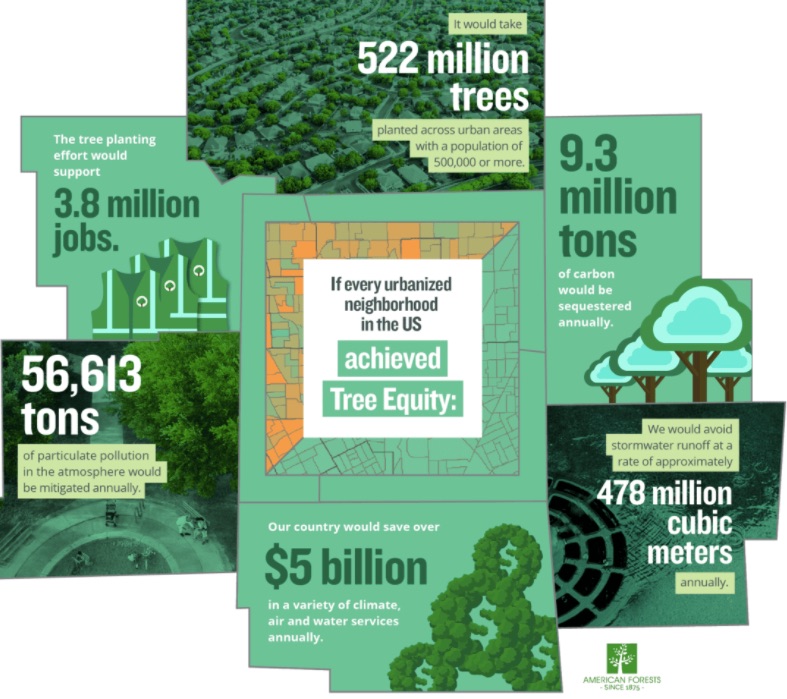 Where are we? Happily, a Biden jobs proposal includes a Civilian Climate Corps that would plant trees. Alternatively, we can just do it ourselves.

My sources and more: The NY Times explained tree equity and then took us to this tree equity link. From there, I checked the temperature story in Australia. Then finally I went back to my sources from a past post. They included some academic confirmation here and facts from the USDA Forest Service. Also, you might enjoy this econlife post on urban affluence and one-way streets.